‘JOY TO THE WORLD’ 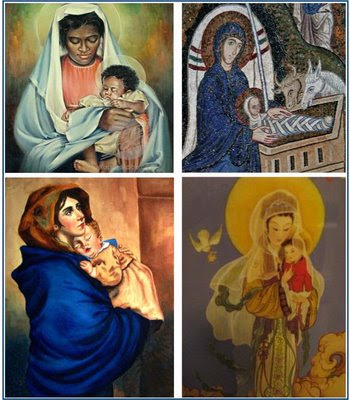 These pictures of Madonna and Child from around the world, formed the cover for our International Carol Service on Dec 20th. Yet again a little glimpse of heaven as people from different ‘tribes and tongues, peoples and nations’ worshipped God in over 20 languages. Somehow this symbolises the coming of Jesus as ‘the person for all people’
The International, multicultural carol service has become a part of our Christmas celebrations. The style is 9 lessons and carols, all read and sung in different languages, representing the multi-cultural mix we have in Woking.

We had around 20 languages - Tamil, Arabic, Farsi, Armenian, Urdu, Russian, Uzbek, Latin, NT Greek, Nepali,  Akan, Swiss German, Japanese, Mandarin, Cantonese, Malay, Swahili, Ibo, Afrikans,  English and Northern!  The last one was quite splendid with the Magnificat being read in broad lancastrian.
Some of the highlights included the Swiss family Lampérth singing 'Das isch de Staern vo Bethlehem'   (with trumpet);  an Armenian couple Asator & Roubina Ghazarians playing classical guitar and singing 'Mojdeh, Isa bedonya amad: Good News Jesus is born'. Quinton Dippenaar sang a solo, karioke-style 'Hierdie Kind: This Child' in Afrikaans. The local Chinese language school formed a choir of around 15 and enthralled us with 'Ping An Yie:  Silent Night' in Mandarin.
Rajen Cheetri read for the first time from a Nepali Bible, I had brought him back from a trip last January (previously he had translated  the text himself).  He also rejoiced at the fact that for the first time in Nepal, Christians can celebrate Christmas on 25th Dec as a public holiday  (See announcement in Christianity Today)
We also had an interview with Dr Haroon of Kunhar Hospital who thanked the congregation for the support (at the first International Carol service 3 years previously) of the work of the hospital during the Pakistan Earthquake. (See article on the CMS website)
This year a collection was taken for  ACROSS (12 churches together in Woking providing hospitality and welcome for Asians) and the Graceworks Youth Ministries - focussing on their partnerships with turning Point Turst in the Kibera Slums of Nairobi, Kenya and Bethesda Childrens' Ministries in Goa, India.

ACROSS's new coordinator Asif Mall from Pakistan gave a short address on 'Christmas:the never-ending story'. He is also involved in an Urdu, Christian Apologetics Satellite TV programme on Glory TV.  (see web link mentioning Asif on Religious intollerance in the West)
It was a great evening with International food and refreshments to round it off.
There was a write up in the Woking News and Mail  1st January  'Global Joy at Carol Service' (unfortunately the article is not online - nor the photos)   They quote me as saying:

'my work means I get to travel a lot and attend many churches around the world. This was an opportunity to bring some of those experiences to Woking and to allow people who don't usually get to hear, speak or sing their native language in church to be able to do just that.'