Around the World in 80 Faiths

A beautifully filmed exploration of world faith, which arouses my curiosity, in a gripping, disturbing, perplexing, fascinating, confusing, enlightening 'cultural-touristic' romp through 80 different faiths, religions, sects and rituals in 6 continents.  I wonder what, if anything, will make sense by the end of the series.
Around the World in 80 Faiths started on 2nd January 2009, on BBC2

In eight episodes, part-time Anglican vicar Peter Owen Jones explores the astonishing diversity of the world's religions as he travels around the globe, observing and taking part in the most important rituals of 80 of the world's faiths.
On the way he explores some of the planet's most beautiful and holy places. He meets snake handlers, Voodoo practitioners, whirling dervishes, horse-riding Sikhs, Shamans and Taoist monks seeking immortality.
He participates in some truly remarkable events, including an Aborigine baby-smoking ceremony, exorcisms, a séance, a Christian healing, Muslim prayer, a Hindu cremation and Zoroastrian wedding.
Pete starts his journey in Australasia and Indonesia followed by the Far East and Africa.
From there he travels through the Middle East, North America, India, South America and finally Europe.
From the great massed festivals of Christianity, Hinduism, Islam and Buddhism to intimate rituals practised by remote tribes. From religions half as old as time to brand new cults and sects, this eight-part series will bring a genuine understanding of the deep diversity of human spirituality.

You can view the trailer here 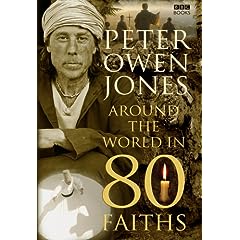 Peter Owen Jones (a bit of a Tom Baker-ish Dr Who look alike) is an Anglican Priest from Sussex. There is a book to accompany the series. There is even a Flickr group to share relevant photos and of course discussion groups.  And you can see the episodes in bits on YouTube.   Lots to get involved in.
Posted by MullanaNasruddin at 00:05