There were 6 street angels (WSA) on duty on Friday night in 3 equal male-female pairs. Perfect.... 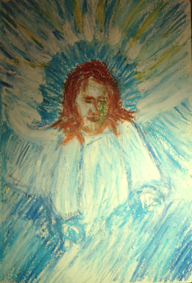 Angel based on Van Gogh drawing

Our pair spent the initial time (first 2 hours) chatting, clearing bottles, greeting people. We talked to Pakistani Taxi drivers and an Afghan pizza man,  as well as Nigerian and Eastern European Bouncers. Woking is becoming much more multi-cultural.  We were offered a glass of green tea by one taxi driver who had once driven me to Gatwick and remembered me by name. I didn't recognise him at first. 'cos he's grown a bushy beard.  The sweet 'kava' was served by a restauranteer from Gilgit in N Pakistan. I had visited there in 1987, even visiting his village of Kaplu in Baltistan, so we had lots to talk about....

Since it had been raining, and because of the general recession, there were not that many people out  but we still had a significant evening of encounters and conversations.

A recent BBC article  claimed that anti-social behviour was down by 21% in Woking since the StreetAngels had been out on the streets.  This was due to a combination of good Community Policing and more visibility by WSA and groups like Outside Lights.   They were under the station canopy, giving away tea and literature. Interestingly some of the police thought we were the same group.

We had a number of encounters, in particular a fascinating conversation with 'Charles'* (*all names have been changed or made up*),  a well-spoken young Trader, someone learning the fast paced lifestyle, currently in £500 a month as a student, but soon expecting to earn £500 a day, if he could keep up with the highly pressured lifestyle.

We came across one man, 'Pete'* sitting on a bench with his head in his hands. He had been kicked out of  pub for disturbing bahaviour and was feeling very low indeed.  He had lost his job and had lived rough a few time in the past and had also been in a drug rehab years ago.  He could see himself sliding back down and was talking of harming himself. So we walked him back to his house. It was difficult to leave someone who was talking of getting a knife to cut himself. Walking away can also be an act of faith.

The police seemed particularly helpful on this occasion going round to check on him.  We later got a message that he was OK and sleeping it off.

We also me someone  'Neville'* who was obviously very high and had great difficulty drinking from the bottle of water we gave him.  He did seem to really enjoy his lollipop.  'Bob the Builder'*  and his mate were looking for a place they could get a pint at 2 in the morning.  We all ended up staying with 'Neville' and helping him walk towards the centre of town, (he certainly couldn't walk very straight at all). They even rolled him a fag.  Bob the Builder said he had been an addict himself years ago, and had been off for 11 years and now had his own family and a good job.  He was really helpful with Neville, who said he had nowhere to stay cos he'd been kicked out.   We gave him a blanket and he bed down for the night in a  doorway near BHS,   The police, who knew him well as a PPO  (Persistent Petty Offender), said they wouldn't disturb him and let him sleep it off for a bit. I thought that was great.....

I mentioned to 'Bob' that he had missed out on that extra pint on his Friday night out. He responded that helping Neville was much better than a pint. It had reminded him of where he had been and how far he had progressed. He may have been a rough diamond in the past, but he certainly shone that night. The Bible talks about practicing hospitality and entertaining angels unawares. Actually I think we saw an angel at work that night in the guise of Bob the Builder.......

Posted by MullanaNasruddin at 21:19 4 comments: 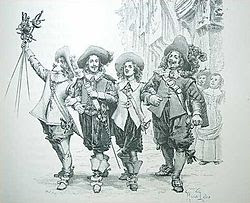 The Three Musketeers (French: Les Trois Mousquetaires) is a novel by Alexandre Dumas, first serialized in March–July 1844. Set in the 17th century, it recounts the adventures of a young man named d'Artagnan after he leaves home to travel to Paris, to join the Musketeers of the Guard. D'Artagnan is not one of the musketeers of the title; those are his friends Athos, Porthos, and Aramis, inseparable friends who live by the motto "all for one, one for all" ("un pour tous, tous pour un"), a motto which is first put forth by d'Artagnan.[1]

Even made famous in Asia through Slumdog Millionaire as the final million dollar question....

And I suppose any group of 3 men can easily be nicknamed 'three Musketeers'  which is exactly what happened to us in CMS.  It was at our Nepal Conference in April that the 3 Musketeers were first farewelled - Adrian, John and myself who had all worked for the formation of AsiaCMS  : 'One for all and all for one'

Since then we had been looking for a D'Artagnon to pass on all our skill and experience. Until finally the new musketeer has been chosen  .... and all is revealed  ..... 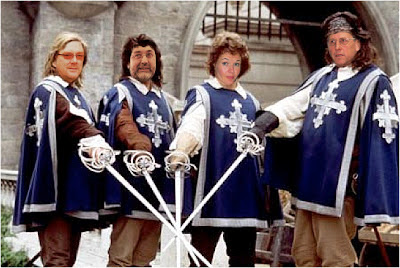 Olivia now joins us  as the forth musketeer.....  and will be looking after CMS work in Asia as the new mission manager.   And I understand she has had a certain nickname.  So maybe that 'Barbie and the 3 Musketeers' was not as outrageous after all!

This now means the other three can start enjoying their 'retirement plan'. Mind you any sighting of Cardinal Richelieu will bring them all running to defend the Kingdom ......

what do you think about? 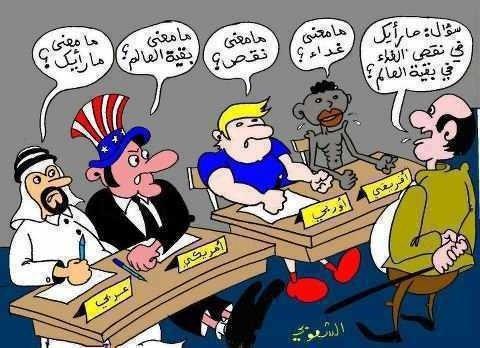 A Palestinian friends showed me a cartoon. 4 men are in a class L to R from Arabia, America, Europe and Africa   Interestingly there is no-one from Asia, or maybe the teacher is Asian!
In Arabic you read from right to left so the cartoon reads: 'What is your opinion about shortage of food around the world?'
the African asks: 'What is food?
The European:  'what is shortage?
the American enquires: 'what is the rest of the world?'
the Arab says: 'what is an opinion?'

Yes, they are stereotypes. But they make a point and suggest global perspectives in the same problem  It all depends on where you are coming from.....

There are lots of TED talk about food shortage. Here's one:

Posted by MullanaNasruddin at 21:44 No comments: