As the Taliban gain a stronger foothold in Pakistan, increasingly violent assaults against religious minorities are further evidence of its growing power and influence. While the Taliban do not carry out all of the attacks, extremist elements inspired by the group are likely to sometimes act in its name.

Christians pray during a service at a church in the Christian slum of Teisar Town, on the northern edge of Karachi. The service was the first in the neighborhood since an April 22 attack by a mob of men shouting pro-Taliban slogans left one child dead and several others injured.Life has never been easy for non-Muslims in Pakistan, but a creeping Taliban expansion has brought increasingly belligerent and violent attacks. — AP/Greg Baker
click here for full story
Posted by MullanaNasruddin at 22:57 No comments:

They will burn us alive DAWN Pakistan

‘They will burn us alive’

‘I suffered these burn wounds while trying to douse the flames in a friend’s house that was set ablaze by armed attackers,’ said another man, Iqbal, in the town.

‘They were Taliban. But not the kind they show on TV, who wear turbans and long beards. They were residents of a nearby locality. First, the children of that locality attacked us. Then their elders came and attacked us. They were chanting pro-Taliban slogans,’ he said.

A woman from his house said: ‘We still can't sleep at night. We feel very scared. A slight knock on our doors sends chills through our spines and our men keep looking out of the house to check for attackers. We are afraid that anything can happen to us at anytime.’

‘Many people who were living in rented houses have left the locality, but we can’t do that. We own this house and have no where else to go.’

Posted by MullanaNasruddin at 22:48 No comments: 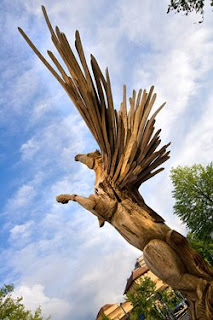 Its the story of a tree destroyed in a strong storm being redeemed and made into a stunning piece of public art.
The work was commissioned by Horsell Common Preservation Society. Remember this is where the Martians landed in 'War of the Worlds' so it needs preserving. The work was carried out by Captain Chainsaw and the Tree Pirates. 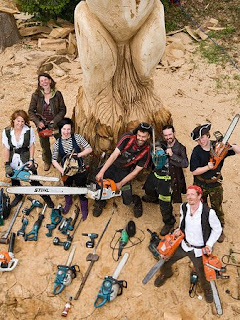 You can read more about it in the heart of surrey   and more photos are available
It is only a few hundred yards from our home and is a brilliant piece of redemptive creativity, inspiring to look at.   I only hope it survives graffiti artists. 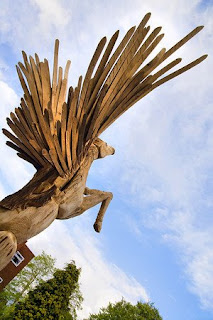 Posted by MullanaNasruddin at 23:03 No comments:

The fighting in SWAT has causes huge rise of internally displaced people in Pakistan. John our CMS Regional Manager for Central Asia writes:

The situation in the Swat Valley of Pakistan has been getting a lot of news publicity and I thought to bring you up to date about the situation from a CMS perspective.

Following the break-down of the peace agreement between the government of Pakistan and the Taleban the Pakistan army moved to re-take control of the Swat Valley and surrounding areas. This was to ensure that the creeping Islamisation of the country was stopped as it had become clear that Taleban groups were creating a corridor to Afghanistan and moving towards Islamabad, the capital.

As a result an estimated 2,000,000 people have fled the affected area. UN agencies have expressed amazement at the speed with which people have fled. The situation has been deteriorating steadily over the last year or more and people have not accepted the brutality and style of Sharia Law that has been imposed on them (destroying girls' schools, public beating of women, enforced growing of beards, banning all forms of music and many forms of entertainment...) People of the Valley see an offensive against a now entrenched Taleban as very dangerous for them. People have moved southwards and eastwards. Many are staying with relatives, impoverishing them unless they get support.

Mardan is a town at the end of the main pass out of the Swat Valley and the Church of Pakistan (Diocese of Peshawar) has extensive property there. Bishop Mano has reported setting up a camp for Christian IDPs and estimates about 150 families staying there. Other people have fled further to the provincial capital, Peshawar, and the diocese has set up a further camp in the old mission hospital. The diocese is appealing for financial support. Information has been placed on the F2S website.

Some large camps are being set up by the government, UN agencies and NGOs. 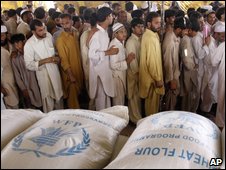 To the east is the army base at Abbottabad. People are moving in that direction too but that involves crossing a high mountain pass.

A CMS partner based in Abbottabad - PMS - has been to the NGO consultation meeting and has set out its proposal for helping families south of the Valley. Although PMS is only a few years old it is well experienced through responding to the 2005 earthquake and has also undertaken humanitarian aid in response to the floods in the south west of Pakistan in 2007. CMS has much in common with this organisation. PMS has appealed to various organisations for help.

All CMS People in Mission (PiMs) are safe and we are in contact with them. There are questions about their continued safety if the fighting spreads or if the Taleban start attacks, kidnapping or other diversionary activities in other parts of the country. We will continue to monitor the situation closely and take advice from people in the country.

Other links:
Pakistan conflict map
US announces Pakistan emergency aid
Posted by MullanaNasruddin at 12:01 No comments:

Nasruddin dreamt that he had Satan's beard in his hand. Tugging the hair he cried: "The pain you feel is nothing compared to that which you inflict on the mortals you lead astray." And he gave the beard such a tug that he woke up yelling in agony. Only then did he realise that the beard he held in his hand was his own.

The Mullah shouts: 'A pious man grows a beard!'

and Nasruddin replies: 'Then my goat is the most pious of all'

Posted by MullanaNasruddin at 13:50 No comments:

In our sacred:space Tom and Mike shared on the Life of Tolstoy and some of his spiritual writings.  Here are a smattering of quotes from a great evening: 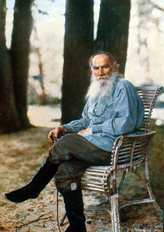 The only way to be happy is to love, to love self-denyingly, to love everybody and everything, without any rules; to throw out from oneself on all sides, like a spider, an adhesive web of love to catch in it all that comes: an old woman , a child, a peasant, a policeman.

Treat others as you would like to be treated Luke 6:31

Love your enemies, do good to those who hate you, bless those who curse you, pray for those who abuse you. Luke 6: 27,28

The principles of true religion are simple, universal, intelligible and clear. There is a God, the origin of all that is; there dwells a spark from the Divine in each person, and this spark can increase or decrease, depending on how we live; to increase this spark we must suppress our selfish wants and egos and grow in love; the practical means to attain love is to do to others what you would have them do to you.

The distance we have gone is less important than the direction in which we are going.

A river that is deep does not make waves when someone throws a stone in it. The same applies with you.If you get angry at insults thrown at you, you are a puddle.

To him who strikes you on the cheek, offer the other also; and from him who takes away your cloak, do not withhold your coat as well. Luke 6: 29

Give to everyone who begs from you; and of him who takes away your goods do not ask them again.
Luke 6: 30

Wealth should be like manure in a field. When it is in a big pile it makes a bad smell. But when it is distributed everywhere across the field, it makes the soil fertile.

Remorse is like the cracking of an eggshell or a grain of corn, as a result of which the seed starts to grow. 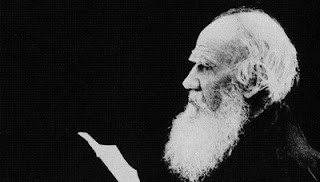 Posted by MullanaNasruddin at 23:24 2 comments:

CH is not cheap - Switzerland May 09

CHEEESE & CHOCOLATE
I have decided that CH stands for not just Commune Helvitia.  but more like Chocolate and Cheese: Fondue and Raclette,  Emmentaler and Edammer, Gauda and  Gruyère, Appenzell and Sprinz.  And famous Swiss chocolate names Lindt,  Nestle,  Suchard. And of course Toblerone. There is a richness about Switzerland that has nothing to do with banking
CHURCH
And CH for church. Whilst I was attending board meetings, my wife accompanied me, mixing business and pleasure. We decided to explore some Protestant roots

Visited  old City Parc with Granite statues of reformers. Huge, austere, almost Stalinist.  Not people you would naturally warm to.  when you see the full size image of the refromation wall  they are even more menacing.  Tall. larger-than-life, solid, granite, stern.  Some one had put red paint on the head of Calvin  So much blood has been spilt in Europe ‘in the name of the Father’

St Paul’s Cathedral, cold granite and polished wood and chandeliers  I was left wondering where do the Gargoyles fit in to the scheme of things in this austere interior. A lighter or even darker mood.  Stained glass the only colour. The Bell towers offered splendid views of the city and good cardiac exercise.

No wonder Geneve is known as the “Protestant Rome”

Near the cathedral is the International Museum of the Reformation

PERHAPS THE MOST REMARKABLE THING about Geneva's new International Museum of the Reformation is that it has taken so long: in 1959, on the 400th anniversary of the publication of Calvin's Institutes, the idea was first floated that a museum should be founded in Geneva, the Rome of Protestantism. In April the museum finally opened its doors, with an impressive array of objects relating to Calvin and the Reformation in Geneva and its expansion throughout the world.

The website offers a virtual tour   And it is a fascinating insight into the causes and context of the reformation
CHATEAUX
We took a trip on a bateau 'the Grebe' run by Swiss Boats to see the views of Lac Leman (or Lake Geneve).   The Lake is a massive 50 miles (80km) long and the tour included many rich houses some dramatic chateaux.

One thing we decided  CH does definately does NOT stand for is cheap!

flikr can provide amazing insights into the 'world of the other' This is but one example. The photos are very evocative. I'm grateful to a friend Colin for pointing these out to me.

A Hazara woman seems sad and angry because damages to her properties and house by Kuchis and Taliban in Behsud - Kajaw. In Daimerdad district - Hazara villagers are gathering in a mosque to discuss about the damages of Kuchis war over Hazara people. Thousands of people forced to leave the area by Kuchis which were supported by Taliban

Let us know of other links you find helpful
Posted by MullanaNasruddin at 15:37 No comments: