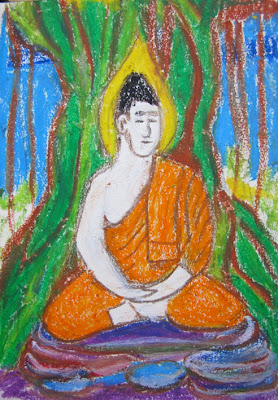 The picture is a oil pastel painting I did based on a picture I saw in Bangkok, Thailand of a common religious image – a Buddha figure sitting under a Banyan tree in the traditional Lotus position. It made me think whether Christ would be portrayed in that culture in such a way - Jesus the Enlightened One.

A colleague of mine presented a paper. He is currently working on a doctorate on the concept of dual belonging -  the idea of following Jesus from within another religious system.
This has been well established among the Peoples of the Book  -  Messianic Believers who are Jewish and follow the Messiah,  and Muslim followers of Jesus – Muslim Background Believers (MBBs ) and the idea of Insider Movements.

But my colleague is from Malaysia and from a Buddhist background.  His brother is a Buddhist ‘priest’. It is part of who he is.  And religion and culture are difficult to seperate, socially politically, legally.  How does he as a Christ follower continue contact with his family and their culture?

Taking it further - Is it possible to be a Disciple from within another religious system?  He writes:

The last frontier for Christian mission in the 21st century is the meeting between religions, and the most important task for Christian mission, I would like to propose is not the challenge of contextualisation but the challenge of in-religionisation.  Evangelicals must, “ask not only for ‘inculturation’ but ‘inreligionization’, i.e. not only Chinese Buddhism or Indian Christianity, but also Hindu Christianity”[1] (David Bosch, Transforming Mission)
Beyond the debates of insider movements, “inreligionisation” will be attempts by Christians coming from Asian religious traditions to "believe that it is possible and even necessary not only to accept in theory certain doctrines or practices of other religions and to incorporate them, perhaps in modified form, into Christianity, but also to adopt and live in their personal lives the beliefs, moral rules, rituals, and monastic practices of religious traditions other than Christianity [1]

How can a person remain true to their own culture and discover afresh the Global Christ -  Jesus ‘the man for all men’  without necessarily converting to Western forms of Christianity.

It’s a fascinating concept and has raised eyebrows in some parts of the world. How is it possible to belong to two religious systems at the same time?  Some would differentiate between faith and religion, and suggest that  a true faith relationship with Jesus is possible within a religious system other than Christianity. They would say it is possible to believe and be a disciple and follower of Jesus without having to convert to the whole package.  And retain some of the key cultural-religious identity.
It is I know contentious.

A strong missional principle is contextualisation - the gospel needs to be interpreted from within the lens of another culture, but the line between contextualisation and syncretism is a thin one and depends on what position you are arguing from.

There is a sense where most of us carry more than one label:

No one today is purely one thing. Labels like Indian, or woman, or Muslim, or American are not more than starting-points, which if followed into actual experience for only a moment are quickly left behind. Imperialism consolidated the mixture of cultures and identities on a global scale. But its worst and most paradoxical gift was to allow people to believe that they were only, mainly, exclusively, white, or Black, or Western, or Oriental. . . . No one can deny the persisting continuities of long traditions, sustained habitations, national languages, and cultural geographies, but there seems no reason except fear and prejudice to keep insisting on their separation and distinctiveness, as if that was all human life was about. Survival in fact is about the connections between things; in Eliot’s phrase, reality cannot be deprived of the ‘other echoes [that] inhabit the garden .[3] (Edward Said, in Culture and Imperialism)

As a Hindu, Ram Gidoomal discovered Christ,  as the "Sanatana Satguru" - the eternal and true guru.  Now as a Christ follower, he describes what Jesus achieved in Hindu terms:  “Jesus is the bodhisattva who fulfilled his dharma to pay for my karma to negate samsara and achieve nirvana!”

Prayer for the Fallen


I came across this beautiful piece of music


Nick Ashman - A Prayer For The Fallen

As well as dedicating the music to his grandfather, he writes:


I've put together this video to commemorate Remembrance Day as a lasting memorial for all the other brave men and women that gave up their normal lives to fight for freedom in both the first and second world wars. We live in their shadow, but somehow that shadow bring light not darkness!
The piece uses the poem 'For The Fallen' by Laurence Binyon, read by Tom O'Bedlam who you can also find on youtube and big thanks go to him for letting me use his voice!

For me too it captures the spirit of remembrance  - respectful silence for sacrifices made. For me it brought to mind my own family history searches, particularly the visit to Flanders to see the trenches of WW1, where 2 of my Great Uncles fell.  I commend this to you over this Remembrace weekend with the 2 minutes of silance at 11o'clock  on 11/11/11 and the services around memorials across the country this Remebrance Sunday

LIGHTEN our darkness, we beseech thee, O Lord; and by thy great mercy defend us from all Perils and dangers of this night; for the love of thy only Son, our Saviour, Jesus Christ. Amen. 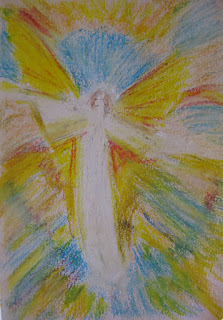 The 'Collect for Aid against Perils' from the Book of Common Prayer seems a good prayer for Street Angels. We started with it on Friday night.  The language maybe a bit ancient, but the sentiment is real. In fact it seemed strangely appropriate as we went out and encountered  Vampires and Witches, the Living Dead, Zombies, frightened teenagers dripping blood, Cruella Deville, and men with capes and sinister 'Scream' masks. It was of course the Halloween  Party at Schism Rock Club  at the Quake Nightclub.   We were told that 650 people were inside.  As I said the language of the BCP seems to fit the Gothic nature of the night.
What was particularly entertaining was seeing the 'smoking cage' outside the night club on the pavement,  opposite the car park full of such characters  It looked like they had all been captured in some sort of a police round up.


You can watch a video of the Foam Party at Schism (featured on the Schism Rock Club website) to get an idea of the electric atmosphere, Or click the YouTube link below

If you go to their Twitter page there is a link to a Facebook photo album with 169 pictures from Friday night's Halloween Party.


In fact there were no problems from the Rocky Horror Show itself.  Everyone seemed happy enough inside and made their way home afterwards  At least we didn't see any trouble. I don't know if the police had to deal with anything.


Otherwise it was  a fairly 'normal night'  Outside Lights were on duty under the Station Canopy from 10-12 giving out tea and coffee and an opportunity to chat.  There were just 5 angels on duty, so we went around in 2 groups.  There were drunks vomiting near NatWest.  One a soldier looked after by two mates and a younger man who was eventually picked up by his parents (I can just imagine breakfast conversation the next day!) The other team stayed with them until it all settled down.   We spend time with 'Bruce Forsyth' as we called him, wobbling his way home after  a night out at O'Neils where there had been a live band. He could hardly walk straight  but we had  a good long chat (at times quite philosophical) with an nice, if somewhat lonely 75 year old.   He was very local, so no problem getting himself home.


And there was noise and verbal abuse. a lady trowing punches at people.  Everything is watched carefully on CCTV and communicated by Radios. I don't think punters always realise that.   We spend a lot of time keeping an eye on a young woman in a tight black skirt and orange high heels  who was having a raging argument with an abusive boyfriend. It started in BED Bar and seemed to encompass most of Chertsey Road and the parallel street where the buses and taxis are.  Standing by and keeping watch isn't always appreciated  ("Who the %*@* do you think you are!  %*@* off! ") but there is little more that you can do. We stayed around until they went their separate ways in Taxis.


I am full of admiration for the Taxi Drivers who exhibit so much patience and politeness in the face of some very mixed behaviour to say the least.  Sure, they get paid for it, but they also put up with an aweful lot.


Do Street Angels actually have any effect by their presence on the streets at night?  That was a question we asked ourselves.  I have absolutely no idea of the actual effect, but we do have some significant conversations and sometime we even seem to be in the right place at the right time.

And there again you get to see the urban foxes on the streets of Woking in the darkness of the night. And I don't mean the ones in fancy dress costumes...  We spotted a pair by Christchurch when we were going out at 10pm.  And as we were leaving, by the Y-Pod at 4am.


Other Blogs about Street Angels:

Posted by MullanaNasruddin at 17:23 No comments: