'Worn to be wild' 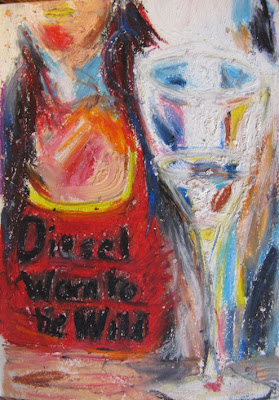 Another painting inspired by some very large pieces I saw in a Restaurant in London. 'Worn to be Wild', is a mini A6 version in oil pastels - part of a series (2 other pics were featured in a previous blog). The originals I was copying, were painted by Paul Lemmon as part of an Exhibition: 'a Slice of Lemmon' put on by the Art Movement.

Again it represents being out with the Street Angels on a Friday night in Woking, when people are out for a good time ...

It was a quiet night. I can almost hear the bouncer at BED BAR touching wood and exclaiming 'never say the Q word' !

But it was Quiet - although I suppose it's all relative. The Police did arrest someone who was drunk outside the BAR for punching a policeman.

We were patrolling the street looking out for anyone vulnerable, particularly under-aged. Making sure people have a good night out, without getting into trouble.

Not a lot was happening, The place was packed the night before because it was A-level results night and Thursday is cheap booze for students with a prolonged happy hour. We are currently recruiting more angels so we can cover Saturdays as well as Fridays, and maybe even some of the 'specials'

Our pair was actually a four, since we had a new angel with us having a look-see. Four is an intimidating number, more like a flight or squadron of angels than the usual two-by two. So a lot of the time we keep a little distance, even walking on opposite sides of the road, so as not to crowd people out.

I followed a suspicious looking pair who were on the look out for coals for their shisha (but that turned out to be my son and friend, getting supplies for the party I had left back home!)

We did the usual and picked up lots of bottles, and spoke to a variety of people - punters and bouncers, taxi drivers, fast food sellers. We got into good conversations with a number of people - some who were initially aggressive. Some were curious. Others just liked the idea of Angels on the streets and wanted to chat.

One woman wanted to become a Street Angel herself. She was a community based carer, with children of her own who was having well-earned time off and a night out with a friend . But she loved the idea of giving out lollipops to one and all and flip flops to ladies struggling with high heels at the end of the evening.

The line between the punters and the angels is a thin one. Angels also like to party.

I suppose it comes down to what is written on the clothing. Designer dresses and labels, 'Diesel:Worn to be wild' on the one hand or a dark rain jacket with florescent yellow 'Woking Street Angels' emblazoned on it

In the Angels' case maybe we should have a label which reads: 'Worn to be Mild'
Posted by MullanaNasruddin at 23:00