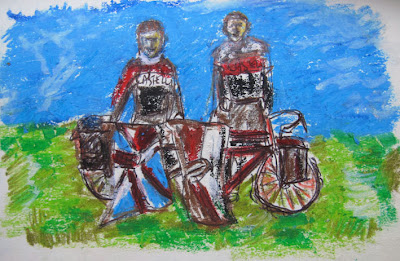 Congratulations to cycle2Kenya on completing their epic cycle ride from Woking UK to Nairobi Kenya. The sketch was done at the time of them leaving UK (and Brugges) at the time we waved goodbye in early June. Now they have arrived back at Heathrow Airport, and have officially finished.
They had a press conference in the Kibera slum Nairobi, organised by VISA one of their sponsors. It sounded a great events with Kids from Turning Point Mamas from the Farm, Press from The Nairobi Star and Nation, plus members of the Kenya Cycling Team

A good number of people have been following the Blog, particularly the map, plus feeds from Twitter (599 followers) and Facebook group (246 followers) and community (193). And by the way, its not too late to support them with a donation to Turning Point Trust via JustGiving (currently at 67% of target)

They were featured in the local Woking paper, The Diocese of Guildford The Wey, and Kenyan National press The Nation and Star. Maybe some more in the future

Finally, as they have officially finished, let me finish off a few bicycle quotes


When I see an adult on a bicycle, I do not despair for the future of the human race. ~H.G. Wells

It is by riding a bicycle that you learn the contours of a country best, since you have to sweat up the hills and coast down them. Thus you remember them as they actually are, while in a motor car only a high hill impresses you, and you have no such accurate remembrance of country you have driven through as you gain by riding a bicycle. ~Ernest Hemingway

Life is like riding a bicycle - in order to keep your balance, you must keep moving. ~Albert Einstein

Some great quotes and what a lovely picture! Thanks Phil.