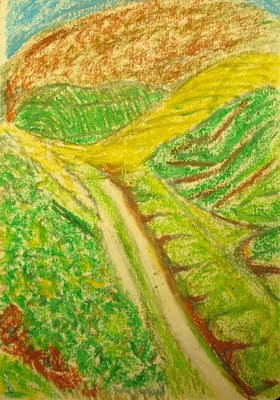 We visited the Cameron Highlands in the Malaysian Peninsular. It is a well known Hill Station where people can escape the heat of the valleys. The picture is a drawing I did of the Boh Tea Estate. So restful, peaceful with various greens and patterns on the hills, like dollops of paint on a impressionist canvas - very heavily cultivated and fruitful.

It is a very British area - for example there are over 4000 land rovers - more land rovers per capita than anywhere else other than a British Army base. These are constant reminders, along with driving on the left and English plug system, all vestiges of the Colonial past.

This was after all a Hill station, where those who could afford it went to escape the heat of the Plains. The rest were left to sweat it out...

The tea plantations, strawberry fields and Butterfly farms are all part of the scene. A Little England - with the Old Smoke House maybe epitomising this quintessential Englishness. We had a Cream Tea in the Rose Garden, wondering for a moment just where we were. Real hospitali-tea!

We stayed at the OMF mission bungalow, which was like going back 20 years to another time and place. Wonderful hospitality,with 3 good meals a day and large bedroom with polished furniture. All set in a beautiful garden with a well mown lawn and cultivated orchids.

It was a great place to read and relax as well as a base for a jungle trek and great mountain views. And of course visits to the Tea Plantations and Strawberry Farms.

My Brother used to go to school in the Cameron Highlands - Slim School, named after the British General who fought the Japanese. So part of the idea was to find where he went. We lived in Penang but in the 3 years we stayed there in the 1960s, I never once visited Cameron Highlands. I was making up for it now....

We managed to find the school, now an Army Camp - 'Kem Slim' - now home of 'Kompeni Bravo, Batalion 165 Risik Tentera Darat' but were not allowed to go beyond the Camp Gate

We also looked around the Town of Tanah Rata, helped by an elderly local restaurant owner, who used to cut hair for the British soldiers garrisoned there. He told me about some of the buildings that had been around in the 1960s:

The Catholic S.K Convent School - now Heritage Hotel. Lutheran Bungalow and the Methodist centre that had taken over the old ‘Chechoo’ mission school.

Rev Simon Soh, a young vicar in training based at the All Souls Anglican Church, (Gereja Anglican), a converted Army Nissan Hut. It was situated just in front of and below the old Slim School. The diocese had plans to upgrade the Church and also build a retreat centre ont he land.

I went to his Bible study group later in the week . a dozen people in a nice apartment, who met as a regular House group. On this occasion they were studying the prophet 'Amos'

It was an interesting passage about 'destroying the summer houses as well as the winter houses' in the Mountains of Samaria, as the 'Cows of Bashan' sit and say 'bring us a drink'. It almost seemed relevant - particularly in the heydays of the Raj.

Now things have changed - the area is no longer British but Malaysian , though as I said vestiges of the past linger. It's as if the Malaysian Chinese have come back from Exile and 'reclaimed the land' ....

“The days are coming,” declares the LORD, “when the reaper will be overtaken by the plowman and the planter by the one treading grapes. New wine will drip from the mountains and flow from all the hills. I will bring back my exiled people Israel; they will rebuild the ruined cities and live in them. They will plant vineyards and drink their wine; they will make gardens and eat their fruit. I will plant Israel in their own land, never again to be uprooted from the land I have given them,” says the LORD your God. (Amos 9:13-15)

Maybe not vineyards but Tea plantations, and definately fruit gardens of strawberries. And it certainly looked like they settled well in the land the Lord had given them.........