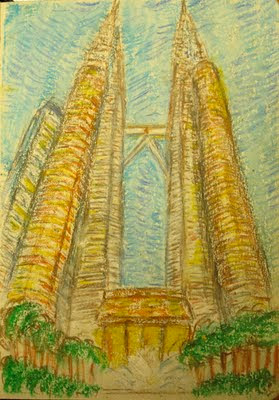 The drawing of Malaysia's twin towers – in KL - otherwise known as Petronas towers - represent the emerging South and shifting centres of power, especially after the destruction of New York's Twin Towers 9/11 nearly 10 years ago.

Kuala Lumpur was the context for our CMS Interchange Network meetings in which we reflected on Post Colonialism and the search for a new mission.

We were using Jonathan Ingleby’s book: Beyond Empire: Post-colonialism & Mission in a Global Context (Author house 2010) There is a Facebook page if you're interested and an article on Redcliffe e-zine.

I felt it was appropriate to be meeting in Malaysia ("truly Asia"), a culture of fusion where India meets China, with expatriate Europeans, overlaying the native Malay culture and the deeper ‘orang Asli’ (aboriginal peoples). Malaysia has I feel, through its very context, many lessons to teach the wider mission world.

The book helpfully explores 5 main tactics for reversing this trend (see Tactics from Beyond Empire pgs 46-60) exploring the freedom to think otherwise. Post-colonial resistance involves emphasising the subaltern voices,hearing thevoice from the margins. It is a non-violent, confrontational approach.

(i) Interpolation: appropriating the colonial in order to dismantle it, and then reassembling by translating the message into another culture ie I play our game but by my rules

(ii) mimicry: using analogy and metaphor; being ‘like but not like’ more a copy not a clone; As an example I remember in Pakistan (the land where copyright meant 'my right to copy') cars were proudly ‘made as Japan’

(iii) archaeology: the idea of digging up the past - looking for the indigenous experiences that have been buried by colonial culture - hearing voices from the margins and thus subverting the prevailing modernist orthodoxy

(iv) Palimpsest: re-using a canvas or Papyrus/ manuscript. The idea was reusing them because they were so rare and valuable - re-writing the story, giving head to what had already been written. The idea that no inscription is indelible - the past can be re-written. Indeed an alternative version of events must be written.

(v) Representation: This is against ‘history written by the victors’, Other narratives must be explored as sites of resistance "Nothing that has happened should be regarded as lost for history" (Benjamin) Even something as well established as Remembrance Day also involves a forgetting of other conflicts (inc current ones)

So Post-Colonialism honours the 'subaltern voices', digs deeper in order to understand complexity and has a wholehearted tolerance of diversity.

Post Colonial Misison may well involve exploring a new form of partnership - maybe co-mission, companions, co-participants, or co-workers, which are more cross-cultural partnerships. I explored some of this in an earlier blog on East and West - see Two States of Marriage

Gillian Ross (pg 92) talks about the broken middle, and how in holding extremes in tension, a new level of trust emerges. Post-Colonial Mission may well involve exploring alternatives to the arrogance of power ("my grace is sufficient for my power is made perfect in weakness"), a weaker mission from the West, more subservient to the leadership of the East.

Thanks for raising this important issue in your blog.

In reference to the above quote from your article could you expand a little on your definition of radical orthodoxy and secondly any thoughts you may have regarding how it is applied in missional practice?

Carl This sounds like a title for an essay..... Maybe I'll have a go some time !