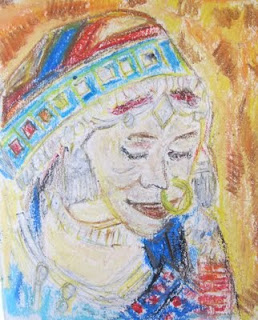 'Indian Bride' is a sketch I did on my last trip to India, trying to capture something of Indian culture and custom.

An Indian Wedding as a celebration is the mainstay of the Indian social calendar for the whole community. Hospitality in abundance. They are colourful, lavish affairs.

And so often, it all comes together at the last minute, just like the Delhi Commonwealth Games
(I came across this poem along the same lines and some great pictures.)

The painting is based on a photograph used by an Indian NGO and it suggests something quintessentially 'Indian', indigenous. Maybe a little is 'lost in translation' but there is a sense that somehow this reflects the culture of organisation

It feels a bit like that as we consider the future of CMS in Asia. The coming together of 2 different cultures. Socially as well as organisationally. East and West. The desire for AsiaCMS to be indigenous, culturally appropriate. Clearly Eastern in all its structures, governance, leadership, projects, programmes. But with people from different cultures. even just within India - North and South, East and West. So many languages and cultures.
Somehow it is about embracing the best of all worlds. A sort of fusion

In Monsoon Wedding (2001) the film culminates with a great dance sequence: young and old, male and female, all celebrating and dancing to the same colourful tune.. Maybe that's as good a picture as any.

And like an Indian Wedding, we plan and trust that it will all come good on the actual day. But there is an awful lot to do in the meantime....

It is often quoted: 'East is East and West is West and ne'er the twain shall meet' and it is left there ... that there is somehow an unspanable gulf between the two...

But Kipling's poem goes on to suggest the possibility of mature relationship, before God, standing face-to-face:

East is East and West is West
and ne'er the two shall meet
Til Earth and Sky stand presently
At God's great judgement seat
But there is neither East nor West
Border nor Breed, nor Birth
When two strong men stand face to face
Tho' they come from the ends of the earth