Cycling through Europe... to Kenya! 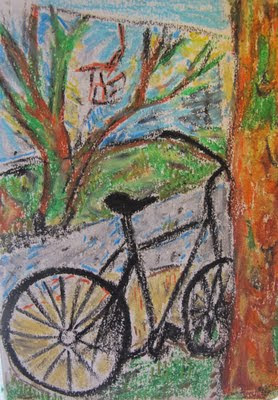 The bike painting is based on one by Bob Dylan. I saw some of his pen and watercolour prints at the Woking Lightbox a year or so ago. And they inspired me, in that I thought: 'I could do that!' I wrote a blog about it in Jan 09: Drawn Blank
The bike makes me think of 'the Continent' as we Brits call it. The idea of leaving your bike propped up against a tree, whilst you have a coffee and croissant in a street cafe. There is something very appealing about it all.....
My son Tim and his mate Mat have just set off from Woking to Kenya on an epic 6500 mile cycle2kenya. You can follow their cycle2kenya blog or Facebook group and Facebook community or track them on twitter. You can also donate online via Just Giving to the Turning point trust. They are cycling to raise money for farms to rehabilitate mamas from the slums of Kibera Mat's sister Emily works for TP and has written a blog about her brother Woking-2-Nairobi tandem adventure. I also wrote an older post on this improbable bike ride
(If you are a firm and are interested in sponsoring, then be in touch by email cycle2kenya@gmail.com)
So this painting evokes something of the beginning leg (or wheel) of their journey through Europe. Except they are riding a tandem not a normal bike.
We're off soon for the Dover-Dunkirque channel crossing and on to Brugge/Bruges to meet them on the first leg. This was partly inspired by the darkly humorous, violent comedy thriller film in Bruges (2008) which we watched together - you can read a review by Philip French in the Observer.
With its cobbled streets, Bruges is not so good for bikes. But then with Africa in view, who's worried about a few cobbles.....
Posted by MullanaNasruddin at 08:28