Angel in the Town Square 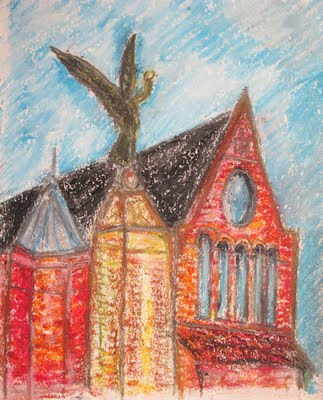 The oil pastel picture is of Christchurch with the Woking Angel on the war memorial in the foreground, so it looks a bit like a tower on the church.(see picture on Woking Surrey Online Gallery)

Since joining the Street Angels, this Angel in the Town Square has become something of a symbol for me - a Guardian Angel keeping watch over the Town.
It is on top of a memorial to men and women of the town who gave their lives in service to their country, during the wars, defending freedom. And that in a sense says it all: 'Greater love as no one than this, to lay down their life for their friends' That sense of service for the freedom of others.
Going out on a Friday night isn't exactly 'laying down your life', but it can be a bit inconvenient at times. We go out from 10pm til 4am focus on the Chertsey Road area where most of the pubs and clubs are: Quake next to HG Wells Suite, Big Apple, O'Neals, and Yates, Weatherspoons, R.S.V.P., The Chameleon and the BED Bar.
After they close, revellers will also frequent the fast food shops, numerous Kebab, and burger bars, KFC, MacDonalds, Subway in search of sustenance.
There are no loos after the pubs and clubs close they are also searching for dark corners and flower beds. I am intrigued why the public toilets behind Weatherspoons are firmly closed after 5:30pm. It wouldn't take much for them to be opened up (maybe the Angels could act as guardians of the keys!?)
Friday night was generally quiet. (We are consistently told Saturday in busier and Thursdays on Student night) The Imam from the local mosque was visiting with the Angels and the team he was with encountered a very disturbed girl, who was definitely not having a good night. Two female angels were able to accompany her back to her house in a taxi (arranged by the Imam) and make sure she was settled.
We were unusually 2 blokes in a pair, which is probably more threatening than a mixed pair, especially when approaching young, potentially vulnerable ladies. We did manage to give out one pair of pink flip-flops to a young woman who had lost her handbag and shoes whilst in BED bar. But others indicated in no uncertain terms that they didn't want help
We had a long chat with one young man who just wanted to talk, and picked up quite a few bottles and gave out the usual lollipops.
Other than that the most exciting moment was watching the landlord of Weatherspoons trying to get a pigeon out of the netting above the pub doors with a long bamboo pole Quite a crowd puller that one.
So the evening was spent keeping an eye on things, making sure people were OK and able to get home, which means following some as the wiggle and giggle their way down the street. We must have looked like we're a couple of old stalkers ! (except for the Angel jackets)
As we were finishing we encountered a Czech man who was celebrating his 23rd birthday in Woking with a friend he knew from school. But he had lost him and had no idea where his house (and all his gear) was.And he wasn't answering his mobile. We went with his to the local hotel to see if they had space. But it was full and expensive. So in the end we walked back to the Station canopy with him and left him with a bottle of water and a space blanket (cos it was getting rather cold) He was simply thankful for the company and that people had taken an interest. ..

These things I warmly wish for you:
Someone to love,
Some work to do,
A bit o' sun,
a bit o' cheer,
And a guardian angel always near