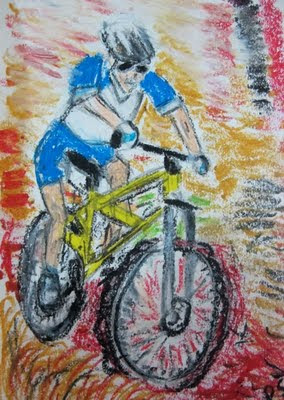 The painting is based on a photo which I saw in a magazine last summer, when I started drawing and painting.

I am dedicating the picture to two mad cyclists, Tim and Matt, who are planning to Cycle2Kenya to raise funds for Turning Point. My daughter, Jo and another son, Jonny are going there with Graceworks this summer to help with a Kids Summer School. In fact all our kids have been there. But the sponsored cycle is for the farms, to help resettle people out of the slums and into a new life. Matt's sister, Emily works there. Read her excellent blog: God in the Slums

It is a long way, around 5000 miles. But the problem is that the democratic movements and protests in the Middle East are making cycling through Syria and even Lebanon/Jordan difficult. And it will be during Ramadan! And if they go from Turkey to Egypt by boat then there is still the Sudan to negotiate. Wars and rumours of wars......

My old lonely planet copy of 'Middle East on a Shoestring' (1997) puts it quite clearly:

'while there are a few places and occasions in the Middle East where a bicycle would be useful, there are many more where it would be a distinct liability. Many long distance routes in the Middle East are arduous, even for motorists and for a cyclist they would be both difficult and dangerous. The distances the climate, the terrain and the politics all make cycling a most improbable method of long distance transport'

They have been loaned a very sturdy Tandem to make it even more 'improbable'. So that got me thinking about 'improbability' and so I found a few inspiring quotes:

"Aim for the impossible and you will achieve the improbable". — Camillo Särs

I for one am right behind them in their improbability and am supporting them in any way I can. But that's inevitable...

Didn't know you had time to draw and paint!

Like the positive quotations! Need lots more of those x

I would just like to point out that I removed my earlier post because my mother inadvertently posted her comment as me.
It was nothing rude or uncouth. I just felt that the kiss was a bit odd.
Loved the blog post though.
xoxo