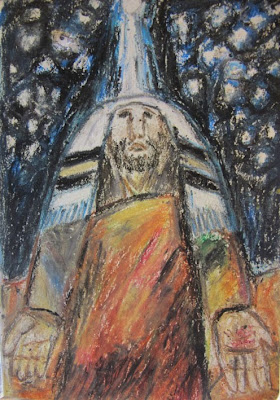 We stayed at Vision City, the training centre of IMA for our faith2share consultation. It is still being built in a remote area on the outskirts of Hyderabad, but it was an opportunity to expand our vision, as they are building theirs, and see the stars and the sand. But it was cheap to stay at, one of the cheapest consultations I have ever attended. And great food....

Someone gave a talk on leadership using Abraham as a model, so these thoughts were stimulated by that. The painting Abraham is copied from and inspired by the German, Catholic priest-artist Sieger Koeder He has some fantastic pictures of biblical scenes that seem to come alive and are 'Glimpses of the Divine'. Other books are also available.

In the talk it was suggested that: "what dominates your mind rules your heart"

Abraham's mind was filled with "Stars and Sky : Sand and Sea" which represented his nomadic lifestyle and were metaphors of the infinite mercy of God. Impossible to count.

He has been promised (Genesis 12) that through him God would bless the Nations - 'in you all the families of the earth will be blessed'. And later as he looked in the heavens and saw the stars he was reminded 'so shall your descendants be' (Genesis 15:5)

He obeyed the (mission) call to 'Go forth' and was known as the 'Father of Nations'. 3 great religions - Judaism, Christianity and Islam - are grouped in the same family of 'Abrahamic faiths'

In the picture, Abraham seems to be in open submission to God as he looks up at the stars in the sky. It reminds me of Mary in the Annunciation, submitting to the voice of the angel - 'be it unto me according to your word'

Abraham kept going wherever God told him to go. He ended up being called 'a friend of God'. He is listed in the great men and women of faith in Hebrews 11. He believed and it was credited as righteousness'

By faith Abraham, when called to go to a place he would later receive as his inheritance, obeyed and went, even though he did not know where he was going.

By faith he made his home in the promised land like a stranger in a foreign country; he lived in tents, as did Isaac and Jacob, who were heirs with him of the same promise.

For he was looking forward to the city with foundations, whose architect and builder is God.

By faith Abraham, even though he was past age — and Sarah herself was barren — was enabled to become a father because he considered him faithful who had made the promise.

And so from this one man, and he as good as dead, came descendants as numerous as the stars in the sky and as countless as the sand on the seashore.

I like that. He was 'as good as dead' He was past it. But Abraham is a reminder that faith does not come to an end - it keeps on going. Maybe it manifests itself differently at different stages of life. Abraham was the first AWAMer ! 'Age with a Mission' - not just modern day YWAM.

I like Abraham. I'll probably do more reflections and pictures on his life .....

He was the original 'wanderer for the love of God'