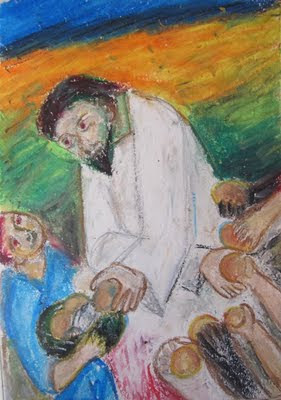 This is my version of a painting of the miracle of the loaves and fishes, by Sieger Koder the German painter-priest. It is based on the famous sunday school passage and the little boy who provides for 5000 plus:

This is a story of a miracle. Some would say a parable. But it illustrates a principle of provision - of taking the little we have and using it and somehow in the process there is multiplication. Maybe by example as others also shared what they had brought with them. More likely by the unexpected, the miraculous, by divine intervention.
This is really odd math: 5+2 = 5000 + 12 ! A lot of people fed and a lot of leftovers (one basket per disciple) Each one with more than they started with...
The story has inspired many in different ways - Just 2 examples: eDevotions for Growing Christians and a clever New Zealand website of resources for evangelism called simply 5loaves2fishes
To me it says something about the creation of social capital and the power of participation. How the resources of the crowd can be utilised once they are realeased. About how weare not alone and must always expect the unexpected. God will provide
For some reason it reminds me of the 5 Venn principles of CMS (maybe its just the number 5 thats the link) I've added my 'commentary' on the principles (in brackets and italics) from the story.

The five founding principles of John Venn, in founding the Society for Missions to Africa and the East (later to become CMS) in 1799 were: