Out with the Angels on Easter Saturday 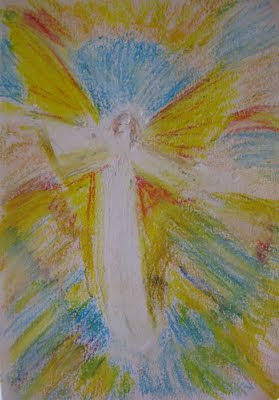 'Angel of Light' is another picture I had seen that I decided to paint. It was inspired by the idea of the Street Angels.....

We were on duty on Friday night/Saturday morning (10pm to 4 am). This is the dark time between Good Friday and Easter Sunday, which is traditionally viewed as the time when Jesus descended to the place of the dead. The Harrowing of Hell. This is based on the concept of the gospel being proclaimed 'to the spirits in prison' (1 Peter 3:19-20) 'even to the dead' (1 Peter 4:6).

I remember a few years back visiting Ypres on the Easter Saturday, to see the battle fields of the 1st World War and the vast cemeteries, full of the fallen. And the Menin Gate for those who have no remains, but are still memories. Hearing the 'Last Post' being played by Belgian buglers is very evocative. It seemed strangely appropriate to be exploring the remembrance of such carnage on such a day.

And in a different way it seemed right to be on the street of Woking on such a night.
A very different scene, not of carnage, but of revelry and merry making for most. Violence and drunkenness for some. The police are out in force, because of incidents that inevitably happen when people have been drinking heavily. Arrests are often made, which is one of the reasons the police are so supportive of the Street Angels - they help to bring down the crime rate.

It was not a particularly dramatic night. We spent a lot of time talking to East European bouncers, and Pakistani taxi drivers. Plus staff at the late night fast food joints. And giving our lollipops to youngsters. Some took liberties. One 18 year old man had about a dozen and kept on nicking them from others. He was very flirtatious with my companion angel, who took it all in her stride. Another female angel, was told "you're f***ing beautiful, for an older woman"! That is, more or less, what you might call a compliment! So they angels are having an impact on the streets of Woking, one way or another.

Maybe the evening was marked for me by a long conversation with a older man, Paul, in an old combat jacket, somewhat worse for wear. He seemed more than happy to talk. He joked and talked about his alcohol problem, a took occassional swigs from his cider bottle. But he went on his way a little more cheerful, after nearly an hour's chat.

Some of our number picked up lots of bottles and also reported a council waste bin that had been set alight. The fire-brigade soon put that one out. One of my growing concerns is where people go to the toilet other than watering the council plants. (I can feel a campaign coming on.)

The Street Angels seek to be a presence on the streets offering support and conversation to those who want it. Clearing up bottles and broken glass. Trying to ensure the streets are safe, so people can have a good time. And I do believe talking to people helps to defuse potentially dangerous situations, so they do not get out of hand. I wonder if things would be worse if we were not there, but that would be difficult to prove.

I suppose Easter Saturday is also about putting out fires, coming alongside people, shining in the darkness ...... Not so sure where the lollipops fit in.
Posted by MullanaNasruddin at 23:30

I find it really interesting to hear what happens to the Street Angels.