A personal reflection on the UN killings in Afghanistan 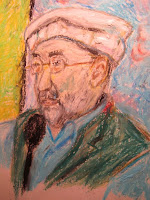 This article is from the CMS website
The painting is an oil pastel I did, based on the photo used, which was taken by Simon in Korea

I followed the events in Afghanistan with shock and horror. The brutal murders in Mazar-e-Sherif and then protests in Kandahar and Jelalabad – all in response to a fundamentalist pastor in Florida and the ‘trial and execution’ of the Qur'an.

The image of the burning Qur'an inflamed minds all around the Muslim world.

It struck me that the Bible could similarly be tried and found wanting, because it is how the text is interpreted and (mis)used that is the real issue.

Unfortunately, careful debate of our sacred texts is not a factor in these situations. What concerns me is the typical pattern of people in the mosque on a Friday being stirred up by the preaching to retaliate.

What may start as a peaceful protest so easily escalates and gets out of control (and the same dynamic happens in London when students take to the streets to protest against tuition fees) until you have a frenzied crowd seeking revenge. That appears to be what happened in Mazar.

What is needed but so sadly lacking in Afghanistan is interfaith dialogue – even more than the usual condemnation of such provocative acts as the Florida Qur'an burning. The trouble with such condemnation is that it provokes an equal and opposite response. And leads to escalation.

Diatribe it seems to me never gets anywhere.

CMS is involved with partner organisations in Afghanistan and has been for many years. There are team members working there in various humanitarian roles. I have visited many times over the past 15 years and seen their excellent work.

One of our people based in Mazar-e-Sherif wrote shortly after the crowd stormed the UN compound and killed staff there:

“We are ok. Shaken up but ok. Gunfire all afternoon off and on. We are staying inside and just waiting to see what will happen. Really devastating that so many UN workers were killed in such a terrible way, so brutally…. It changes how you view people. I am sick of all this senseless killing. The building was our side of town, some people one street away had bullets land in their garden. We will probably just keep a low profile for a few days while the facts of what happened comes out.”

That’s the problem with senseless killing – it makes you sick, tired and weary and can erode your commitment. 'Compassion fatigue' can apply to workers as well as donors.

Like the apostle Paul, we are at a loss to understand but not despairing (2 Cor 4:8–9). Shaken by events but not stirred up to participate in the cycle of revenge.

The challenge is to ‘hope against hope’ and to just keep going.
Posted by MullanaNasruddin at 14:20