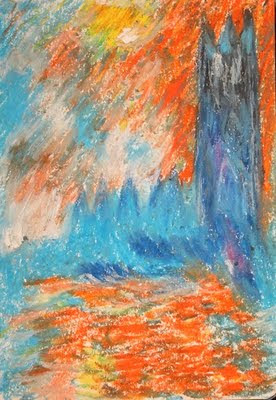 I did this version of Claude Monet's Houses of Parliament, Sun breaking through fog (1904)
He used to live in Lower Norwood, not far from where we used to live in Penge. ( seperated by a couple of generations!). The Houses of Parliament were one of his favourite. He did a series of 8 painting, all on the same size canvas, since they were the same view from window. But all very different. His last, more impressionist painting is startling for its more liberal, less literal use of colour. And that certainly suits me ! Mine is but a pale reflection of a part of his picture. But it is still evocative of London and the Thames.
It also evoked T S Elliot's poem about his journey to London, part of his 'Choruses from the Rock' Collected Poems 1909-1935 (97) The poem remains a wonderful reflection on the relevance of the Church, in the City, in the suburbs and in the country ......

I journeyed to London, to the timekept City,

Where the River flows, with foreign flotations.

There I was told: we have too many churches,

And too few chop-houses. There I was told:

Let the vicars retire. Men do not need the Church

In the City, we need no bells:

Let them waken the suburbs.

I journeyed to the suburbs, and there I was told:

We toil for six days, on the seventh we must motor

To Hindhead, or Maidenhead.

If the weather is foul we stay at home and read the papers.

In industrial districts, there I was told

In the pleasant countryside, there it seemed

That the country now is only fit for picnics.

And the Church does not seem to be wanted

In country or in suburbs; and in the town

Only for important weddings.

Given the Royal Wedding this week the last line seemed particularly pertinent. And it was a Very Important Wedding. The Nation seems to want the Church then ... for State occasion and National functions. Mind you I did like the pagentry and bits of the service - the reading from Romans 12: 1-2, 9-18 and the talk by the Bishop of London

I attended another, family wedding this week in the country, in Pembrokeshire in S Wales. Whilst it took place in a URC Chapel, it was effectively a secular wedding. The singing was superb and lots of fun. With popular songs like 'I'm a Believer (The Monkeys)' and 'That's Amore' (Dean Martin) The congregation put their heart and soul into it. And a lot of imagination had gone into the poems and readings. It was a great wedding .... but God hardly got a mention. And that felt somehow empty.

I suppose it was a 'more liberal use of colour' which I enjoyed... But as in the Monet painting, I continue to look for Sun breaking though that fog.........