The Lightbox exhibition in Woking winner of the £100,000 art fund prize for museums & galleries in 2008, is currently hosting an exhibition of Bob Dylan paintings: ‘Drawn Blank’
Sketched in the late 80s early 90s during his travels in USA Europe and Asia. He started drawing ‘to relax and refocus a restless mind’. ‘What would I draw? Well I guess I would start with whatever was at hand. I sat at the table, took out a pencil and paper and drew... I’d lose touch of time completely. An hour or two could go by, and it would seem like only a minute’
You can see the paintings on Bob Dylan's website 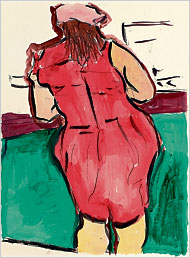 They are reworkings in 2007 of the original sketches. Provincial scenes that appeal to a traveller like me. Places and people, pub-life, town and country. Modes of transport, bicycles and trucks. Hotel rooms and cafés, views from balconies. Some pictures framed by windows, portholes, doors. An empty motel pool. Man on a bridge. Train tracks. Woman in Red Lion pub. A lazy Sunday afternoon down by the river. Dad’s Restaurant.
They have a ‘singularly disenchanted aura about them, a feel of unresisting and unrewarding blankness’ (Andrew Graham-Dixon in the book Drawn Blank) ‘Dylan’s coiled and slightly nervous manner of drawing, which often teeters on the brink of cartoon or caricature is in a line of descent that goes back to the works of artists like Toulouse- Lautrec, Degas, van Gogh.’
I started connecting the pictures to the music. His portfolios are repetitive, same picture, different colouring. The Woman in the Red Lion Pub (from Blackpool), reminded me ‘the times they are a changing’.

And 'Slow train comin’ was so slow in fact that it couldn’t yet be seen on his painting of ‘Train Tracks’ (Minnesota) .
The Van Goghic man on the bridge (looked like Moscow to me) seemed to be ‘knocking on heaven’s door’. A tramp-like prophet, singing out his haunting songs: 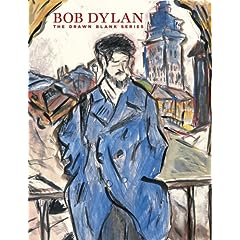