'Out with the Angels' - Friday night in Woking 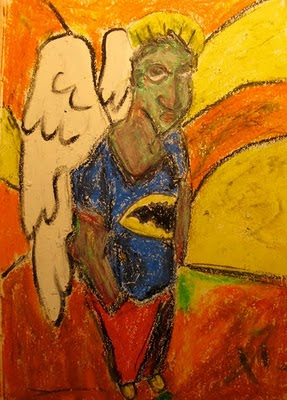 This was my first time as a street angel - 11 of us on duty on Friday night. We gathered at 9:30pm for a 10 to 4 shift. Organised in pairs, two hours on and one hour off. The break time is spent in the council office staff room, which is also used by police and others.

I was with Margaret. It was a cold night but not very busy. We walked the streets to get an idea of the patch. Saying hello to one and all. Striking up conversations where wanted. Especially to people on their own. A Welsh girl. Man with dreadlocks who wanted to become an angel himself. A Russian bouncer outside Yates. The manager of a nightclub, RSVP. Plus the police – two teams the local community police and the quick response from Guildford, plus lots of taxi drivers, mainly Pakistani.

One team stayed with a very drunk 14 year old, under the station canopy, until her grateful mother came to take her home. We met a girl, Cloe, on her own sitting on the pavement outside a pub. Her 'ex' was inside and wanted nothing to do with her. We stayed with her while she vomited up the evening’s drink, gave her water and another team escorted her to the bus to make sure she was OK getting to a friend’s house.

A brother and sister were vehemently fighting in the streets, with a friend trying to separate them. Lots of things were said they would later regret. And it was at times violent. A shop window was nearly broken. In the end just being there, hanging around persistently and trying to talk to them, they eventually stopped. The sister was put in a taxi home and the police took details. They were known but not wanted. It ended all very amicably with both men expressing appreciation and exchanging hugs with the angels.

3 young girls who looked around 14/15 kept appearing, asking for lollipops. We did see one angel - a young woman off to a club in white body suit, dancing tutu and wings. She looked COLD…. And there was a jovial, old busker, who improvised a song about lollipops. A good laugh had by all ….

A taxi driver spoke to us of some of the abuse he had suffered at the hands of drunken customers. One man had ripped his coat and tried to strangle him. The 3 girls tried to cadge a lift off him, ‘mum will pay at the end’ they suggested. He refused "Mother’s never pay”, he explained, “mothers are always tucked up asleep in bed and never pay"

A night worker waiting for her lift, just grateful to be asked if she was alright.

We came across one couple arguing. So difficult to tell if the violence is going to escalate. And they didn’t really want any interference, so we moved on…

At the end of the night, we met Ted, a young man in a suit, who had had a £1800 bike stolen the week before, so he was off home, a 4 mile walk along the canal at 3am. We chatted and gave him a lollipop… He shouted back as he was walking off; “Amazing, the lollipop really does it for me, it really f***ing does!”

Woking seems to appreciate the angels on the streets. They just want them there on busier Saturday nights as well…….

We're just glad you are out there taking care of our teenagers and building a bit of community spirit. Keep on polishing those halos