An Impression of Madonna and Child 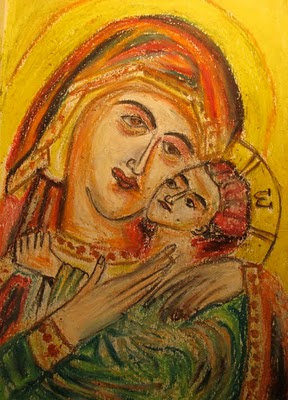 I was inspired to draw an 'impressionist Icon' whist at Hillfield Friary in Dorset.
It is based on a print they had on sale in the shop.
It was also inspired by the sacred:space evening in Woking when Anton Ponamarev from faith2share came and spoke on Windows on Eternity: Orthodox spirituality of Icons
Icons are used by Orthodox churches around the world, with c 25o-300 million believers. That makes them probably the most common Christian art form. They are not idols that are worshipped, but are used as a means of 'veneration' - to focus the mind on the subject of the icon. A window on heaven.

Perhaps the most famous icon is the Vladimir Madonna and child
which acts as a sort of prototype for other icons .
interesting how the Christ child always looks like a 'little man'
in our sacred:space, we discussed about what is the difference between an Icon and a painting and looked at various examples. Sometimes it is unclear. But Icons are genearlly two dimentional, flat, no shadow.
There are conventions in painting an icon none of which I followed. My picture is more impressionistic in style so maybe it is neither a painting nor an icon. But it was insprired by faith....
It seems appropriate to end with an orthodox version of the Magnificat, the Song of Mary (in English) as it anticipates the 'upside-down Kingdom'

My soul magnifies the Lord,

and my spirit rejoices in God my Saviour;

For he has regarded the lowliness of his handmaiden.

For behold, from this day all generations will call me blessed;

For the mighty one has done great things to me, and holy is his name.

And his mercy is on those who fear him from generation to generation.

He has shown strength with his arm;

He has scattered the proud in the imagination of their hearts;

He has cast down the mighty from their thrones and has exalted the holy;

He has filled the hungry with good things,

and the rich he has sent empty away.

He has helped his servant Israel,

in remembrance of his mercy,

as he spoke to our fathers,

to Abraham and to his seed forever.