What think ye of Christ? 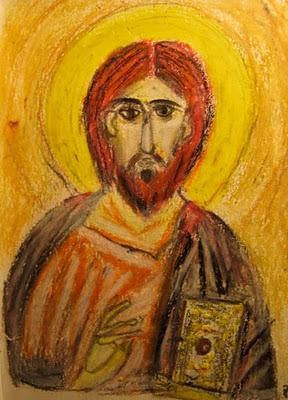 The painting: 'an imitation of Christ' was an attempt at a more iconic style - similar to Madonna and child - which was actually painted later. Oil pastels in an A6 sketch book.
Jesus in my picture looks a little cross-eyed to me. But at least he is not blue-eyed blonde-haired.
I do think everyone needs an opinion of Jesus. At some point we all need to look into those eyes as it were and work out what he was all about. What he represented. What he stood for.
Those eyes become a mirror of our own soul......
The poem by John Newton asks the same fundamental question: What think ye of Christ ? With his own conclusions at the end.......
Posted by MullanaNasruddin at 20:50

I like your image, Phil. Great to be reminded of this hymn, too.

Thanks Colin
I'm enjoying painting at present. Quite therapeutic.
P

I had never seen that poem before. It's wonderful.