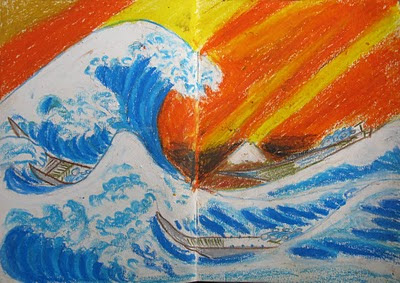 Hokusai's The Great Wave, a woodblock print (c 1830) was part of a series of 'Thirty-six views of Mount Fuji' (Fugaku sanjūrokkei). It was featured in Neil McGregor's 'A History of the World in 100 Objects'
The Great Wave became a symbol of the changing times, as Japan opened up to the West after a policy of splendid isolation. This was just before Admiral Perry and his US gunships enforced trade with the West in the 1850s.
The Great Wave dwarfs Mount Fuji, the symbol of Japan, and is about to engulf the 3 fishing boats and their tiny crew. It represents the inevitable onslaught of modernity. McGrregor suggests:

It also, I think, shows a peculiar Japanese ambivalence. As a viewer, you have no place to stand, no footing. You too must be in a boat, under the Great Wave, and in danger. The dangerous sea over which European things and ideas travelled has, however, been drawn with profound ambiguity'

I was inspired to do an impressionistic version as a result of the 'Sendai Earthquake' in Japan and the consequent Tsunami. Seeing video/ movies of the onslaught of that great wave, sweeping away everything in its path cars, houses, ships, planes, trees, people - brought to mind this picture. What struck me as I was drawing was a macabre thought about the similarity between the wave and a rack of spare ribs! And how the people in the boat looked so small and ant-like.
Inevitably, I'm not the only one to have made the connection between the picture and recent events, as this cartoon suggests: 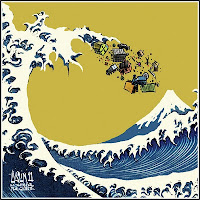 One newspaper article suggested that the Tsunami was humbling for all who think mankind is in charge. What fools we are to think we can tame the wrath of nature Robert Hardman "it has served as a brutal lesson that, in the scheme of things, homo sapiens is not so sapiens after all. We are just ants with cars"
Posted by MullanaNasruddin at 14:49