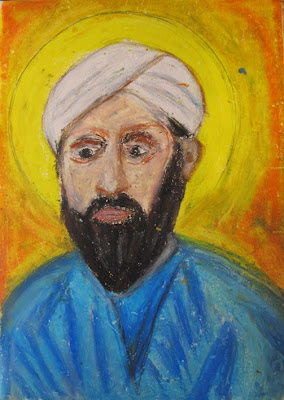 This time a picture inspired by Sadhu Sundar Singh (1889-1929). Except he looks a bit like Captain Haddock in Tin Tin ('Blistering Barnacles'....) I copied it from a B&W picture , Maybe I should have painted him in a Saffron robe....
I just have one book on him: 'The Gospel of Sadu Sindar Singh" by Frederich Heiler ISPK 1989 (First published in 1924 under the title 'Sadhu Sundar Singh Ein Apostel des Ostens und Westens' abridged translation by Olive Wyon) And it only cost me 50Rs in India. It is available as a FREE googledocs download
There are some other good online resources - an introduction to his life plus of course a Wiki version and the new world encyclopedia entry and if you speak German try this. He was obviously very popular in Germany, having visited in 1920s (he also visited Britain, Australia and the States on a preaching tour)
He was converted from a Sikh background in Dec 1904. He was disillusioned and suicidal at the time. He describes his conversion in his own words:

“Suddenly — towards half-past four — a great light in his little room. He thought the house was on fire, opened the door and looked out ; there was no fire there. He closed the door and went on praying. Then there dawned upon him a wonderful vision : in the centre of a luminous cloud he saw the face of a Man, radiant with love. At first he thought it was Buddha or Krishna, or some other divinity, and he was about to prostrate himself in worship. Just then, to his great astonishment, he heard these words in Hindu- stani : Tu mujhe kyun satata hat ? Dekh main ne tere liye apui jan salib -par di (" Why do you persecute Me ? Remember that I gave My life for you upon the Cross"). Utterly at a loss, he was speechless with astonishment. Then he noticed the scars of Jesus of Nazareth, whom until that moment he had regarded merely as a great man who had lived and died long ago in Palestine, the same Jesus whom he had so passionately hated a few days before. And this Jesus showed no traces of anger in His face, although Sundar had burnt His holy Book, but He was all gentleness and love. Then the thought came to him : "Jesus Christ is not dead ; He is alive, and this is He Himself " ; and he fell at His feet and worshipped Him. In an instant he felt that his whole being was completely changed ; Christ flooded his nature with Divine life ; peace and joy filled his soul, and ** brought heaven into his heart." When Sundar Singh rose from his knees Christ had disappeared, but the wonderful peace remained from that moment, and it has never left him since. He said afterwards : " Neither in Hindustani, my mother- tongue, nor in English, can I describe the bliss of that hour."

He believed that a message that was for all mankind, and had universal significance:

If the Divine spark in the soul cannot be destroyed, then we need despair of no sinner… Since God created men to have fellowship with Himself, they cannot for ever be separated from Him… After long wandering, and by devious paths, sinful man will at last return to Him in whose Image he was created; for this is his final destiny.

He dedicated his life to a Sadhu-style mission particularly within North India, and the Himalayan region of Tibet and Nepal. He went wider afield to South India, Ceylon, Burma, Malaya, Singapore, Japan and China .
He disappeared in the Himalayas in 1929 (possibly in Tibet) and his body was never found. He remains a fine example of indigenous Christian leadership, modelling a non-Western form of mission, the Sadhu wandering the dusty footpaths, which had a far reaching impact.
He once said (on a mission trip to the West):

'We Indians do not want a doctrine, mot even a religious doctrine, we have enough and more than enough of that kind of thing; we are tired of doctrines. We need the Living Christ. India wants people who will not only preach and teach, but workers whose whole life and temper is a revelation of Jesus Christ'