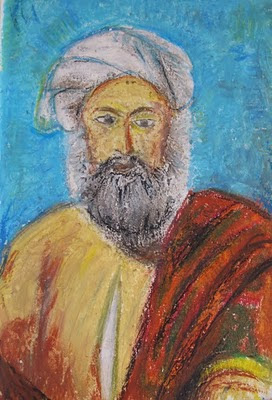 I decided to do a drawing of Abdul Masih, based on an Oil Painting we have in the office. It is a picture that has fascinated me for a while. I wanted to know more about him. I had found a couple of pages on a book some time ago, which I had photoed and now have typed up. But I cannot remember the title, which is most unhelpful. Still it tells something of his story. He is remembered on 4th March . . . . .

Abdul Masih’s name was until his baptism Sheik Salih. As that implies he was a Mohmmedan, and was in fact the first member of that faith to be converted by the Anglican Church in India and ordained to the Anglican Ministry

He was born into an orthodox and respectable family in Delhi about the 1765 and was brought up with a good knowledge of Persian and Arabic. As a young man he had a somewhat varied career until the time when he was staying with his father at Kanpur and happened to hear Henry Martyn preach. He was deeply impressed. Through copying Persian manuscripts for Martyn, and when Martyn had finished his Persian translations of the N/T. it was given to him to bind. Whilst doing this he read the book carefully and became convinced of the truth of Christianity. However he did not open his heart to Martin at once, but waited till Martyn was about to leave for Calcutta in the autumn of 1810

Martyn was not fully convinced that Sheik Salih was ready for baptism, se he took him to Calcutta and, when he himself sailed out for Persia early in 1811, left him in the care of David Brown who was then in charge of the Old Mission Church. The enquirer was baptised in that church on Pentecost Sunday 1811 with the Christian name of Abdul Masih, servant of Christ. He lived for some time longer in Calcutta and at Shinsurah, working as a preacher and catechist, showing not only his considerable ability but also a wonderful humility and zeal in the face of much opposition and persecution.

When Daniel Corries was posted to Agra as Chaplain at the end of 1812, he told Abdul Masih with him as catechist in the pay of C.M.S. Their joint ministry at Agra was so greatly blessed, both among the Christians of all races and in preaching to non-Christians, that when Corrie left for England in 1814 he left him in charge of the congregation jointly with an Anglo-Indian catechist. Abdul Masih received Lutheran orders at Calcutta in 1820. Four years later Bishop Heber was so impressed by his work at Agra that he brought him to Calcutta and gave him Episcopal ordination in St John’s Church in November 30, 1825. Though he was under 60 years of age he health was already failing and he died at Lucknow on March 4, 1827

The report of the Calcutta C.M.S committee for 1827 includes a ling and laudatory notice of his work including the following words, “He had laboured in the service of the CMS for upward of 14 years, during the whole of which period he had uniformly adorned the doctrine of God our Saviour, and greatly endeared himself to Christians of all classes in society. By patience and meekness under persecution and reproaches for Christ’s sake, and by persevering endeavour to return good for evil, even his enemies had become at peace with him”

We thank God for Abdul Masih’s witness to his Master both by his work and he Christian character. Let us pray that all who bear the name of Christ in our day may follow his example.

You can read more in an article which mentions him by Eugene Stock
and a downloadable pdf by Graham Kings called Abdul Masih: Icon of Indian Indigeneity
Posted by MullanaNasruddin at 22:21