The Sorrow of Christ

‘One of the most appealing artistic pieces I saw in India was by K.C.S. Paniker . It is called the Sorrow of Christ Pakiker was a noted Indian artist and art teacher. In 1957 he became principal of the Government College of Ats and Crafts in Madras. After his retirement he helped organise a village of young artists, outside Madras city at a place called Cholamondal. I remember visiting him there. I took a jeep from Madras. It was a hot day and the road was dusty. It took almost two hours to reach the place. Paniker, white-bearded welcomed me. He was at that time 62 years old.

He took me to his studio and showed me his sculpture called ‘The Sorrow of Christ’ I asked him: ‘Tell me, what led you to do this work?. He said “ I am a Hindu. We contemplate and pray and fast. We meditate on the way of compassion. I read the Bible at Madras Christian College, where I studied. I was impressed to find that this man, Jesus of Nazareth, not only prayed for, but actually related himself to the misery of marginalised people, such as those who suffered from leprosy.” 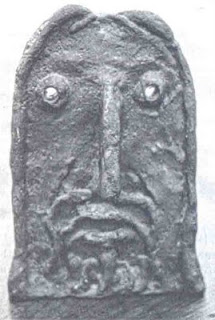 The sculpture vividly shows the compassion of Christ, identifying with the misery of suffering people. His nose is distorted. His mouth is misshapen and his eyes pop out. I thought the Christ, of the mis-shapen nose and his eyes pop out. I thought this Christ, of the misshapen nose if one of the most penetrating images of Christ in Asia where the physical condition of leprosy and the social status of the outcast are still a part of our existential reality.’

KCS Paniker.Com under the Banner of "Sight & vision" Presenting an exclusive Documentary film on
the Maestro of contemporary Indian Art

Thanks for this Agn! Sharman Much appreciated
I will get a friend in India to order it for me