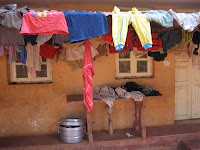 Bethesda Life Centres GoaMartin and Beena set up the ministry in Goa in 98 not long after their marriage.Martin spent time in Papua New Guinea for 3 years and they were also in Hillsong Australia as a couple for a year after their marriage.
Her father VA Thampy started the New India Church of God’ www.nicog.orgin Kerala in the 1970s. There are now more than 2000 churches over India as well as Nepal Dubai. They also run Children’s homes and schools, refuges for women as well as 11 missionary training schools. The model is sending out mobile teams. This is not so much a denomination but a mission movement ‘Christ for the Nations’
'ONE ACT OF KINDNESS'
Meena’s Father VA Thampy He was converted aged 19 in a remote village in Kerala from a Greek orthodox background. He became passionate about sharing the gospel even preaching from the top of Palm tree, using a home made megaphone (I’ll write that one up later) The story is told in a book by Brendan McCauley ‘India – one act of Kindness’ (Tate Publishing 2004).

I spent the day visiting the various projects: ‘Daniel’s Enclave’ home for 58 boys (where 2 of my children Andy and Jo have worked on summer programmes) I had kids climbing all over me and we even celebrated Jo’s birthday with chai and cake and banana chips.
The girls home ‘Rebecca’s Enclave’ is home to 36 girls. When we visited they were playing a version of HopscotchThey are also renovating a 3rd home which will they have bought to relieve the pressure on Daniel’s enclave Plan to take e in another 15 who need admission70& of the children are without parents, children of aids victims HIV+ve children are refereed elsewhere The others are mainly children of sex workers plus some leprosy background children 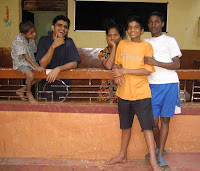 They also work with women to help them return to their villages.
Martin and beena have established a newtwork of support from churches in Woking,  Gretton and York a charity in UK exists to support wwwJames1v27foundation.org.uk
Girls from our church were also spending time there as part of as gap year travelling in Asia. Our church youth ministry 'Graceworks'  sends teams each year to work with them, to both encourage and are themselves encouraged by the experience. They appreciate short term volunteers but they also need trained people who can take responsibility and bear some of the burden for the work.

Goa has a colonial feel to it. The Portuguese colony with a strong Catholic influence . The relaxed, easy pace of life attracts tourists It is particularly famous for its beaches and now it seems for the casinos. I stayed at the Mandovi Hotel on Panaji, near the water front. A number of floating casinos blared out dance music. The Indian-Portuguese mix is reflected both in the food and in the churches. Here the twain shall meet. 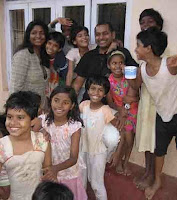 I also visiting the bible school run by Manoj, Registrar and Ligi, academic dean. It started in 1997 as a missionary training centre They run a 2 year residential programme with a one year practical internship. To ‘train and send’ This might be to work with children, schools, street kids, church planting, training centres, mobile evangelistic teams
Around 20 students from Orissa, West Bengal, Kerala, Kanata, Tamil Nadu, Andréa Pradesh Manipur and Myanmar.  I shared my own journey in a mixture of Hindi/Urdu and English, as well as some Biblical principle of mission and some of the changes and challenges in the mission scene. The students were enthusiastic and welcoming, We then had a quick lunch before dashing off to the airport to pick up my flight to Chennai. A great way to spend a morning.