Many Asian Christian artists such as Jyoti Sahi, Nalini Jayasuriya and Alphonso are utilising the rhythmic form of the circle and centre to express the presence of Christ. They clearly and simply place Christ at the centre and in that representation he embraces the cosmos as a whole.
Take for example the painting Christ Mandala by Nalini Jayasuriya, She is a third generation Christian from Sri Lanka, where Buddhism is the predominant religion. To be sure, there are numerous expressions of mandalas, varying according to locality, such as Tibetan, Chinese, Japanese. The original meaning of mandala is ‘assembly.’ 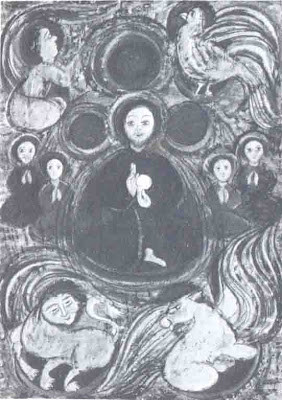 In Nalini Jayasuriya’s Christ Mandella we find in the centre the Christ figure. He is seated in the lotus posture of meditation with his hands in a Mandala gesture of blessing. He is surrounded by a circle which can be interpreted as a mandala or halo (a ring of light) position) representing the glory of God. Or it can be read as a mandala of a circle of light showing Christ as the centre of the Universe. To the left and the right are fiur small human figures representing the four evangelists (left above Matthew , the human figure; left below Mark the lion; right below Luke the ox and right above John the eagle) we also note tha above the figure of Christ there are three suns representing the Trinity, and all the motif’s float on a sea of fine circular lines suggestive of the vibrations from the centre outwards and back again.

This suggests a harmony rather than dualism between spirit and body, secular and sacred, the paternal an the material , heaven and earth. positive and negative and good and evil

you can find more on Yale's Prism
and and article by Nalina Jayasuriya on art as theology
The 'Christ Mandella' image is used on the front cover of Christianity and the Religions: From Confrontation to Dialogue by Jacques Dupuis,