I have just finished reading a fascinating book, ’Autobiography of a sex worker’ by Nalini Jameela.

Nalini Jameela (50) holds her book 'The Autobiography of a Sex Worker' in the southern Indian state of Kerala December 14, 2005. Her long, wavy, black hair tied loosely in a knot, Jameela looks like any other Indian housewife. But this attractive, largely uneducated mother of two is a best-selling author and prostitute whose outspoken views of sex work as an ordinary career choice have stirred controversy in conservative India. [Reuters] 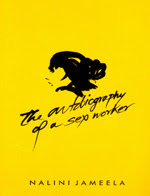 “I am Nalini. Was born at Kalloor near Amballoor. I am forty-nine years old.” When Nalini Jameela wrote the first sentences of her autobiography in a notebook in 2003, a client who chanced to read these lines left her — not out of fear of exposure, but because she had told him she was only 42!

When the autobiography finally appeared in print two years later, in Malayalam, it sold like hot cakes. In J. Devika’s English translation of the revised memoir, Jameela speaks as a sex worker, a description deliberately defined by her profession.
I wanted insight into the lives of some of the people I have seen in Pune and in Kolkatta. I have met children of sex workers, many HIV+ve in various orphanages, in the Alpha Village, in Satvana, in Bethesda, all desperately seeking love and affection . I was also struck by the movie I saw (Zindagi break the cycle Timothy Giakwad) which portrays sex trafficking of a young teenage girl. What is life like for these women? So when I saw the book in Hyderabad Airport I picked it up. It was an opportunity to read a real story of one such woman.
What is fascinating is the total 'otherness' of her life situation  and the experiences she goes through. She is a Malayalam speaking woman of a similar age to me, but totally different circumstances. She describes a chaotic, unstable, a ‘perchance’ sort of lifestyle wandering from opportunity to disasters, tossed about by people who variously use her and abuse her. At different seasons of her life a labourer in a clay mine, a wife and mother, a business woman, a sex-worker, a social activist and filmmaker, a political speaker and writer. She appears to drift between worlds and describes it all naturally without much polish.

She starts life a Hindu and marries a Muslim. It was particularly fascinating to read of the twilight zone surrounding mosques where she sought refuge at various low points in her life. One particular concern is protecting he honour of her daughter. Her greatest challenge is how to provide for and nurture her offspring without the normal social convention of a male protector.

It is disturbing in that it brings into the public arena what is so often swept under the carpet, it gives voice to sex workers. It even defines language which is more acceptable. It is controversial in that it gave voice to women sex workers through one of the community who has spoken out and told it as it is. Some accuse her of being too outspoken.

One web based review I read:

It's not long -- 143 pages -- and its translation doesn't feel right -- but I would say it makes complusory reading.
It is, in many ways a shocking book -- NOT because of what it says about the life of a sex-worker but for what it reveals about the lives of so-called "ordinary" Indians. ….. Jameela's story is one of extraordinary resilience - Against the backdrop of Jameela's account, however, "ordinary" and "extraordinary" cease to have much meaning -- she shows us that the huge majority of "ordinary" people have "extraordinary" experiences, in which case they are no longer extraordinary in the sense of unusual, but merely the norm –--- Jameela's life and the lives of the huge majority of those amongst whom she lives -- not just sex-workers, but the tradesmen, the rickshawallas, the policemen, the small hoteliers -- are marked by unrelenting insecurity, hampered by such extremes of heartlessness that it is really difficult to understand how they can bear to face up to their realities –
The Malayalam edition of her book was snapped up -- 13,000 copies were sold in the first 100 days, according to the introduction of this book. It is not a salacious book -- no-one reading it, I believe, is likely to get any cheap thrills from it. To some extent, I miss the spice that has been (I think deliberately) left out.
How ironic that less provocative books -- lacy fictions built on middle-aged fantasies -- are decked out like scarlet ladies, while this one, about and by a scarlet lady, looks as meek and saintly as a vegetarian recipe book!