Bush fires in Australia - news from a freind 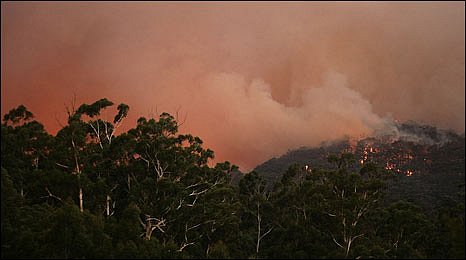 I have never seen anything like it in my life. The temperature was 48 Celcius, the winds were gusting at 80 - 90 MPH.

Whole towns have literally been wiped from the map. The toll so far is 108 confirmed dead but that is expected to grow as police get to sift through the debris.

We are aware of 2 Christian rehab centres caught in the fires. One was only opened last year by a group called Betel. They had bought a former guest house in Marysville and had a small team in place and 6 residents in the program. The fire came at such pace that they only had time to climb into cars and escape with what they were wearing. In the confusion I am informed that one female member of their team is missing. Their whole centre is just ashes today. One of the leaders who is based in Italy is flying home at the moment to assist them. The township of Marysville is no more. The whole town, which has been a very popular tourist centre for over 100 years and only an hour & a half from Melbourne, is gone.

The other place is run by a group called Remar International. Their property is in the middle of dense bush and at this stage we have not been able to contact them at all. All communications in that area are down. Due to the ferocity of the fires in that area we can only presume that their centre will have been destroyed but we will keep trying to find more detail about this group.

It is fair to say that the whole state of Victoria is in shock today. Everyone I have spoken to today has a story to tell about a relative or friend caught up in the fires. Either people missing or dead, or houses burnt to the ground.

Please pray for these situations. The tragedy will be ongoing for many months. Even when rebuilding begins their will be scarred lives struggling to deal with all that they have experienced.

According to the BBC  the fires were started by arsonists and so far 170 lives have been claimed
Posted by MullanaNasruddin at 19:33