I had a morning in Hyderabad on my way to Goa so had arranged to visit an All India Sunday School Association (AISSA) training programme, being run by Rev Dr Ipe Joseph of the Mar Thoma Orthodox Church. He is the General Secretary and Bp Naresh Amballa of Eastern Himalaya Diocese Darjeeling is the President. They made me feel most welcome. It was a joy to sit in on 6th National Training programme Teachers Training Certificate Course being held at Jeevan Jyothi Catholic retreat centreI met around 40 teachers from different churches and language groups, participating in their reflective style worship, joyous singing as well as b
ringing greetings and sharing a little about CMS. It was we agreed infinitely better than drinking Nescafe in an airport waiting lounge. In fact it was more akin to ‘dessi chai’ (local tea)
Religions Plurality

Ipe Joseph presented a paper on Christian education in the context of religious plurality. Ipe Joseph is a man with a big smile and endless energy. He advocated what he called ‘ecumenical learning’ ‘a process which enables people of the world belonging to various countries religions cultures races economic classes and genders to become sensitive and responsive to those who are different from themselves…. While being rooted in ones own faith and tradition, an ecumenical learner takes the risk of being open to change’ He outlines 7 basic affirmations (which Include without comment because they are definitely worth reflecting on)

1 There is only one God. We are the children of that God, even if we belong to different countries, religions and cultures. Accordingly all people share a common humanity

2 Plurality is a gift of God. God created many colours, species and other diversities. God’s world is like a garden of many colours. Discrimination in any form is against God’s plan

3 Life came first and religion much later. So we need to respect life more thane we respect religion.

4 God is at work in God’s creation. So creation declares the handiwork of God

5 God is at work in all people and in all religions. So we need to respect other faiths

6 Understanding the faith of others will help us to understand our faith better. So Christian educators should make special efforts to learn about other religions. It is a sin to condemn other religions without knowing what they believe!

7 Jesus loves people of other faiths as much as he loves us. Jesus is for the whole world and not for Christians alone

In Mumbai one of the first things I saw was a sign on the back of a car: an expression of religious plurality and indian integration 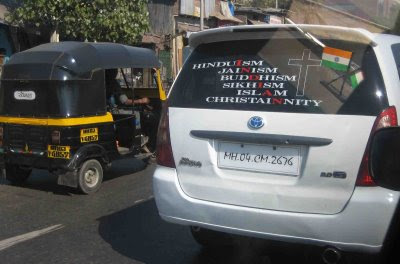