I am reading the classic book on Asian Spirituality 'God is Rice:  Asian Culture and Christian Faith' by Masao Takenaka (WCC,1986)
I will share some of his insight over a number of blogs because it covers a range of interests in church, culture, mission, art, spirituality. And it connects very much with the search for indigenous, Asian missiology.     The following is an extract:

Asia is so big and diverse. It is not easy to identify Asia. What we have in common is the habit of eating rice, the ubiquitous bamboo, and the use of broken English as a necessary evil for inter-Asian communication.

We can trace the Silk Road along which silk was transported by horses and camels. We can trace the ceramic route taken by boats. Both were primarily for the rulers and the rich. But we can also trace the rice road, and that was used by common people all over Asia. To be sure there were varieties of rice; what one ate depended on geography and personal preference. Nevertheless, it remains true that rice has been and is our daily food in Asia.
It is appropriate for us therefore to say ‘God is rice’, rather than ‘God is bread.’  Kim Chi-Ha, the well known Korean Christian poet, who was sent to prison several times in the last 10 years (70/80s), has written 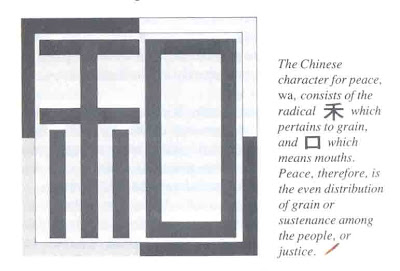 It certainly reminds us of holy communion, which is the occasion to share our daily food together with all people and a symbol of eternal life. This has a social implication as well as a spiritual meaning. The Chinese character for peace(wa) literally means harmony. It derives from two words: one is rice and the other is mouth. It means that unless we share rice together with all people, we will not have peace. When every mouth in the whole inhabited world is filled with daily food then we can have peace on earth.   (p 17-19)

'Last Supper by' Sadao Watanabe
When he was in his mid teens Sadao Watanabe, a well-known Japanese print artist, fist visited a Christian church, introduced by a neighbour who was a school teacher. He had lost his father when he was ten years old, and tended to live a closed and isolated life. He described his first impression of Christianity as follows

'In the beginning I had a negative reaction to Christianity. The atmosphere was full of "the smell of butter", so foreign to the ordinary Japanese'

(Sadao Watanabe - the man and his work by Masao Tekenaka in biblical Prints by Sadao Watanabe 1986)
Now in his print work he joyfully depicts the celebration of the holy communion with sushi, pickled fish and rice, a typical Japanese dish, served on traditional folk art plates. For him rice is a more natural and a more fitting symbol of daily food than bread which is foreign.    (p6-7)