A question of balance? Interfaith engagement 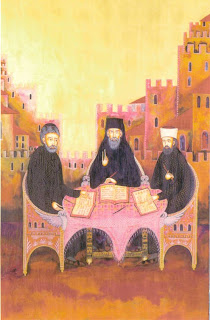 A question of balance?

There has been a lot of internet traffic over how Christians engage with Muslims, about what model dominates, and how we deal with difference.

The Barnabas Fund have written to supporters requesting prayer in the face of persecution. I have a deep respect for their advocacy role and support for Christians under pressure in majority Muslim context. Patrick Sookdeo is a leading voice. ‘Distinctly Welcoming’ by Richard Sudworth is suggesting a gentler, more relational approach. I know Richard and also have a deep respect for his approach, with the emphasis on hospitality and openness.

There tends to be a polarisation between the conciliatory and the confrontational approaches, the irenic and the polemic. And the debate has certainly been polarised.
There have been numerous statements:  Ben White's article on Fulcrum,   Barnabas response  and a response from Fulcrum and even a statement by CMS.
The ‘Fear Factor’ in relation to Islam can be debilitating and a powerful antidote to real relational engagement with Muslims. In the computing world we have learn the term ‘WYSIWYG’ = ‘what you see is what you get’. How we perceive reality becomes that reality. The stories we tell, become the stories we live.

We are encouraged to love our enemies and those who persecute. Perfect love casts out all fear. The Hawks and the Doves always seem to argue with each other, not only in Politics.  Such polarisation is unhelpful. We need to being doing both/and - Both supporting the victims and extending a hand of peace to Muslims.

Maybe there also needs to be some more discussion on how Christians engage with each other !

It reminds me of a story by Nasruddin.    He was asked why it s that in the morning some people go off in one direction and other people go off in other directions. He thought for a moment and then replied ‘If everybody went in the same direction the earth would lose its balance’