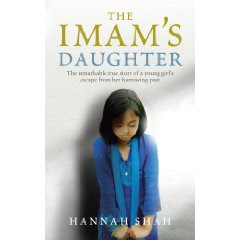 This is not a light read in that it describes the abuse that 'Hannah' (not her real name)  suffered at the hands of her father, the Imam of their small town mosque. And the quiet, submissive compliance of her mother. She describes life in the tight-knit community in the North of England, which seeks to parallel ‘home', based on  rural, village community-life in Pakistan. The rules in their ghetto are strict, life is constrained and Islam is interpreted (by her father) very rigidly. She feels like ‘a caged bird crying’, a 'captive butterfly' craving freedom. She describes her small world of 'home-school-mosque' where she was effectively a 'domestic slave'. And life in Britain with its interests and struggles and her normal desire to be accepted by friends and to get a decent education.
She finds this elusive freedom only after running away, aged 16, from a forced marriage. She eventually finds acceptance through a teacher  that befriends her,   and then through her teacher's church where she discovers faith in Christ.  She then decides to be baptised and discovers what being 'murtadd', or apostate, really means in the eyes of her community. And she is hunted by people intent on killing her. A so-called ‘honour killing.’
Eventually she comes to terms with the years of abuse, is married for love and eventually agreed to tell her story publically. She also speaks at churches about Islam explaining that all Muslims are not as extreme in their interpretation as her father. His form of Islam is she believes ‘unQu’ranic’. And it was only reading the Quran in English, that helped her to see this, rather than the Arabic she had memorised, but failed to understand.

I found it compelling, mainly because I have met ‘Hannah’ and could hear 'her voice' as I was reading it. That certainly adds to the authenticity and the deep sense of disquiet at reading of the horrible abuse she suffered. But also the sense of joy at knowing of her current happiness and freedom.

Baroness Cox of  Christian Solidarity Worldwide describes the book as 'Brilliant and compelling...raises issues which are worthy of serious consideration and discussion'

I remembered reading an article about Hannah a number of years ago  British imam's daughter under police protection after converting to Christianity  by Ruth Gledhill, Religion Correspondent of The Times  (December 5, 2007)

A British imam's daughter is living in fear of her life under police protection after she received death threats from her family for converting to Christianity.

The young woman, aged 32, whose father is a Muslim imam in the north of England, has moved house 45 times to escape detection by her family since she became a Christian 15 years ago.

Hannah, who uses a pseudonym to hide her identity, told The Times how she became a Christian after she ran away from home at 16 to escape an arranged marriage.

The threats against her became more serious a month ago, prompting police to offer her protection in case of an attempt on her life.

She was speaking on the eve of the launch of a new charity in London today to promote greater religious awareness. Muslims in Britain who wish to convert to Christianity are living in fear of their lives because of Islamic apostasy laws, a senior Church of England bishop will warn at the invitation-only launch in west London.

The Bishop of Rochester, Dr Michael Nazir-Ali, will claim "freedom to believe" is under threat in Britain because of Islamic hostility to conversion.

I just finished reading this book and I have no words to describe it except very powerful.

I just finished reading Hannah's book and commend her for her endurance and tenacity. I probably would have taken my life in her situation. I'm thankful she survived to help other young Muslim women escape a life of torture and abuse. If only more Muslims could speak out and expose the atrocities in this culture. Knowing what I now know, I will pray often for Muslims, that they will find Jesus, the true God, who loves them and wants to save them. I will pray for Hannah too that God continues to use her to help her people to find Him.

not all muslim's are the same and i think this is about ur life ur tragic family . i was a christian that converted to a muslim and i can asure u and the world i have a man of gold . he is nothing like this and a pakistan live's with ue here in south africa . It should be known that NOT all are the same . I had worse abuse with a hindu tamil man and his hectic family.. sd a muslim i found peace ..

Aaliyah, what matters is what kind of Muslim the Prophet was, not your own experience.

He was the sort of Muslim who said things like "من بدل دينه فاقتلوه", which, in case you don't know Arabic (I do), is "Whosoever changes his religion, slay him." Sorry for the bad news.

God and his Church await your return with open arms, charity, and compassion.

A quick lesson on the terrifying ways of the Islamic prophet followed closely by an invitation back to Christianity. The hypocrisy is unparalleled.