alantlwilsonRT:  never misunderestimate George Bush. As he said, "The trouble with the French is they have no word for Entrepreneur"...
These Bushisms are all from Wikipedia
General

"Too many good docs are getting out of the business. Too many OB-GYNs aren't able to practice their love with women all across this country." —Poplar Bluff, Missouri, September 6, 2004 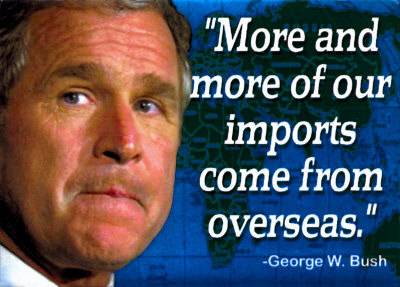 "Our enemies are innovative and resourceful, and so are we. They never stop thinking about new ways to harm our country and our people, and neither do we." —Washington, D.C., August 5, 2004

"We were trying to say something differently, but nevertheless it conveyed a different message". -January 12, 2009 Press Conference (Time Magazine, January 26, 2009, p13).