Helen who worked for the Asia Team as East Asia Administrator has written about a Co-Mission Partner meeting in Pune earlier this year.
Helen spoke to Adrian who looks after CMS work in the Region:

"This was the first ever gathering just for people working with CMS in Asia who are from Asia. It therefore had much more of an Asian than British or Western character and identity.”

For CMS, ever-increasing collaboration in the region could also signal a new step forward.

“Given the growth and current scale of our work in South Asia this is now the time to establish some kind of physical presence in the region,” said Adrian.

Indeed, on leaving the conference, Adrian felt he’d begun to glimpse something new that had hitherto been just a dream.

“It was not just another conference – there was a clear sense of celebration of the emergence of an identifiable ‘Asia CMS’.” 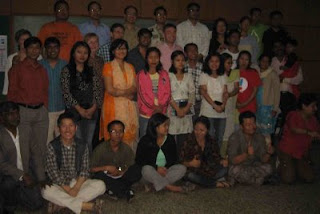