Bishop Michael Nazir Ali is moving on from his role as Bishop of Rochester to a more direct involvement in Christian-Muslim engagement and issues of persecution.
An article in Fulcrum  has some more details of the Sept 09 move.
I also like Bishop Nick Baines’ Blog comment:

I remember hearing Michael for the first time at a clergy conference when I was a curate up north. He spoke without notes and without hesitation, repetition or deviation for an hour and then responded skilfully to questions from the floor. It was remarkable and his ability to remember details is formidable. Which is a good word to use of him. He is a formidable opponent, but a remarkable ally. Whatever one makes of his stance on particular issues or his absence from last year’s Lambeth Conference, what must never be questioned is his integrity or courage.’

My experience has been similar  He has been my 'boss' at CMS , when he served as General Secretary (1989-1994) and our paths have crossed on many occasions in Britain and Pakistan. Lambeth 98, the Queens Garden Party, Westminster, Interfaith meetings.   Most recent was at the Pakistan High Commission  in London when they threw a Christmas Party for Pakistani Christians in Britain. We sangs Pakistani Carols, had Bible readings (I even prayed for the Nation of Pakistan in Urdu)  and Bishop Michael spoke there elequently.  It was obvious the high esteem with which he is held by the Pakistani Community.
2 articles taht are worth looking at with very differnet views on the situation:
Melanie Philips in the Mail When a bishop has to leave the Church of England to stand up for Christians, what hope is left for Britain? By Melanie Phillips, writing in the Daily Mail
on 01st April 2009

And finally a cartoon from the Church TImes. 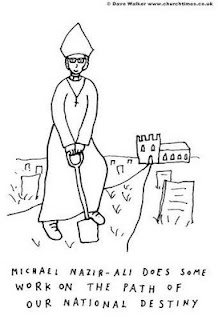 I wonder what new path he will dig.
Posted by MullanaNasruddin at 21:56

So who is one to believe?

Is he moving on or being pushed out?