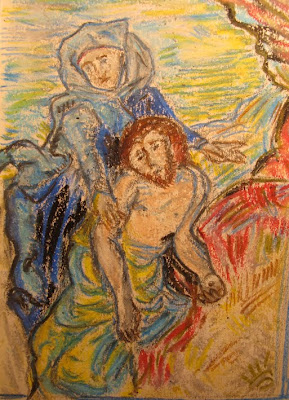 Another in my 'series' of Vincent's paintings, this time Pieta 1889, Mary cradling her dead son based on another painting by Delacroix (as with his Good Samaritan) A very intimate moment between a mother and her son has been captured, with Mary cradling the body of Christ. Pietà literally means 'pity' and has been much represented in art (see wikipedia)
Vincent has identified fully with Christ in his suffering since even in my oil pastel rendition he is recognisable (just about!) It suggests that the preacher turned painter remained drawn to Christ even in his latter years....

As an artist, van Gogh remained fascinated by Christ. "Oh, I am no friend of the present Christianity, though its founder was sublime." He described Jesus as "the supreme artist, more of an artist than all others, disdaining marble and clay and color, working in the living flesh." Finally, van Gogh’s preoccupation with Christ is visually apparent in his rendition of the Pietà, in which he depicts the Christ figure with the features of his own face and red beard, languishing in the arms of Mary.