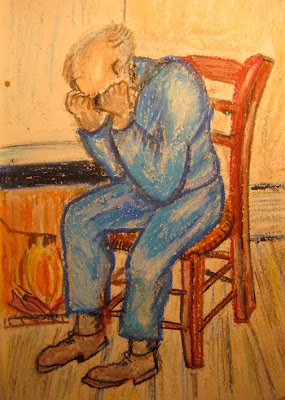 Van Gogh's Old Man in Sorrow (May 1890) seems to sum up his depression and mental anguish.

I like the ambiguity as to whether he is despairing or praying, or maybe both. My old man does not appear to be as despairing as Van Gogh's. He is not as bowed over. But he is still gathered close to a fire, a source of warmth and life.
Vincent did an earlier lithographic version (1882) of this Old Man with his head in hands (at Eternity's Gate) Maybe this represents the resolution of 2 themes: despair and hope coexisting together.

There is a good article that explores some of the relgious themes in Van Gogh's paintings From Preaching to Painting: Van Gogh’s Religious Zeal I quote:

One of van Gogh’s first successful lithographs, At Eternity’s Gate (1882), depicts an old man seated by a fire, his head buried in his hands. Near the end of his life, while recuperating in the asylum at St. Rémy, van Gogh re-created this image in oil. Bent over with his fists clenched against a face hidden in utter frustration, the subject appears engulfed in grief. The work would convey an image of total despair if not for its title. Even in the deepest moments of sorrow and pain, van Gogh clung to the faith in God and eternity, which he tried to express in his work:

The expression of such a little old man -- perhaps without he himself being conscious of it -- is unspeakably touching when he sits so quietly in his chimney corner. It reveals something which cannot be destined for the worms . . .this is far from all theology, simply the fact that the poorest little woodcutter, heath peasant or miner can have moments of emotion and a frame of mind which give him a feeling of an eternal home to which he is near.

As van Gogh pointed out, the sentiment in this painting is "far from all theology," but he wanted to show that though he had rejected institutional religion, he remained profoundly religious and firmly believed in a spiritual life after death.

The Psalms are full of anguish and heart searching. Monastic communities have traditionally prayed and lived them as part of their community life and found their thoughts and feelings reflected in them. It too is gathering to the source of warmth and life - the fire of hope.