I was passing by the shops in the Bukchon Hanok Village area of Seoul,  when I was grabbed by an image in a window, and discovered an exhibition  ...... 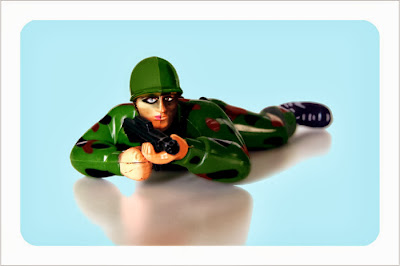 The visual artist, a French-Israeli photographer, who studied in San Franscisco, was present and happily signed a card with the soldier image. I commented that it was an appropriate image for Korea's Armed Forces Day. (celebrated every 1st October, to mark the 38th parrallel being taken in the Korean War)  She hadn't made the connection ....

The image made me think of the thin line between play and reality, and how even great empires play at war. The war between the North and South Korea is still being played out, under an fragile truce.  Yesterday's parade was all about a show of strength (see BBC news) another type of exhibition. But it is a more costly game, and countless lives are lost. As the old protest song goes: 'when will they ever learn, when will they ever learn?'

The exhibition is entitled PLAY TIME  and her other images are previewed here
It is currently on at Gallery Gahoedong 60, presenting the solo exhibition of the Israeli artist, Dana Ramon Kapelian.   She writes about the exhibition:

The images are about the boundary between a child's imagination and an adults fantasies and actions. It is all in the seer's mind.Things can be interpreted as innocent or devious, playful or full of temptation.


Singing, dancing, stories and silence... I like that.   There is something about becoming like a little child in order to enter the Kingdom of God ....


I'm staying at the Doo Guesthouse.  It's a traditional Hanok style of Guest house. Very Korean.
I'm taking the opportunity to catch up with some blogging. (I'm surprised to discover its been nearly 3 months - I'll try to fill in some of the gaps with some retro blogging - a new word I've just made up!) 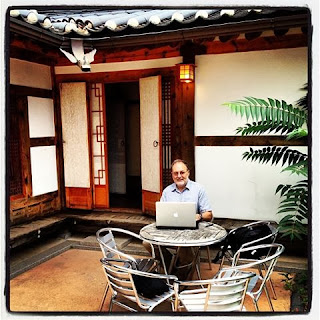 Not quite what you would call a typical day at the office  but #someonehastodoit. It's just a part of the life on the road, wandering for the love of God