I am grateful to Seth at CMS for photo-shopping this picture of me, like Mulla Nasruddin riding a donkey backwards. He did it for my leaving card. The problem is that it looks far too authentic! Maybe its the shape of things to come! 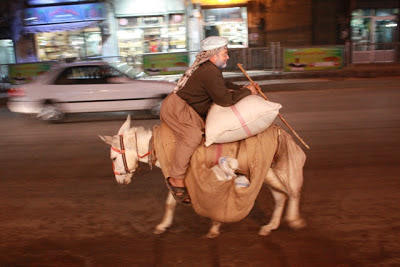 I like the picture because of the plodding donkey carrying its heavy load with the speeding car in the background, blurred as it travels into the future (off to the right? or is the future the other way round in the East, to the left? Like the writing? )   Nasruddin has an eye on the future but is inextricably plodding back into the past at a much slower pace, leaving the bright lights of the shops behind.  And of course he doesn't know where he is going. He trusts his donkey to take him home.....

I have been asked a number of times where I get my Nusruddin stories from. Well I bought my favourite book ‘Nasreddin Hodja’ in Turkey for about $10. This particular book has wonderful images.  An Amazon search will come up with the goods. click  HERE 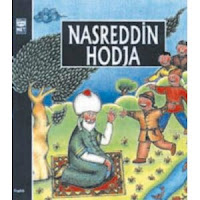 But I have also collected a number of other books In Turkish, Arabic, Urdu, Persian as well as English. I can’t read them all, but I do collect them (I’ve heard there is a video cartoon in Russian which I’m on the lookout for). And he goes under many names including Gohar, Hodja, Joha, Effengi, Mullana &/or Mullah Nusruddin. His stories have been related and embellished for centuries, from North Africa to China, from Siberia to Samarkand, in Caravanserai all along the Silk Route. There is something timeless about them.

And if you can’t get hold of the book this website - seems to have electronic images of every page. Nasruddin would approve!


So why does he sit on his Donkey backwards?

Well I have heard at least four different explanations: 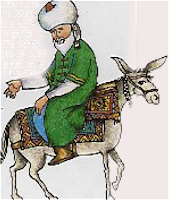 One day, Nasruddin Hoca was riding home from the mosque on his donkey, and there was a large crowd behind him. Suddenly, he got off, and got on again backwards, facing the animal’s tail. The people naturally asked him what he was doing.
He replied: ‘I thought about it, and decided to ride my donkey like this, because I have no time for disrespect. If you move ahead of me, then you will be turning your back on me. That would be terrible disrespect. If I go on ahead, I will be turning my back on you, and that is also quite unacceptable. This way, I can go on ahead of you and you can follow behind, and we can still keep looking at each other!  That is the logical way!’

Being respectful, is one of the essentials of entering another culture. facing people, being careful where we point our feet, not turning our back... Not wanting to be disrespectful in any way.

But there are other explanations …….

I suppose it is easy to blame others and I certainly have a very stubborn streak in me that insists I am right even when the evidence might suggest otherwise .....

Or alternatively another version of the story 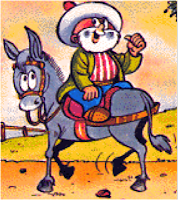 - Nasruddin  the people said, you are sitting on your donkey  backwards!

- No, Nasruddin replied. My friend here wanted to go one way and I wanted to go the other, so we are compromising.

Compromise is after all, quintessentially English? Well maybe Turkish as well. Whatever culture it represents, compromise is necessary when more than one will is involved...

Or perhaps my favourite response

- No, said Mulla Nasruddin. It's not that I am sitting on the donkey backwards, It's just that I'm more interested in where I am coming from more than where I am going, my friends.


I suppose I have always had an eye for the past, whether dabbling in a little genealogy, or watching a good historical movie (where people dress up in costumes and then kill each other!)

I also believe that 'meaning making' is retrospective. We only really work out what has been happening when we look behind and see the patterns ....  The rest of the time we are in the present, in the moment, trying to work out what is going on. 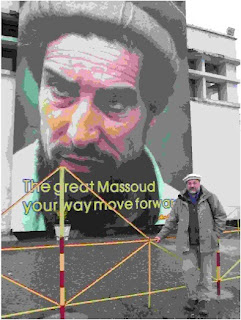 The picture of yours truely standing in front of a poster of Ahmad Shah Masoud on at Kabul Airport, which is there to inspire people. ‘Your way move forward’ he suggests.

That, as Nasruddin would say, is the logical way!

Love it.
Mullah Nusreddin is my fave Muslim!
I often tell stories of him.

Slov I totally agree with you Mulla Nasruddin stories are full of deep meaning. Which one is your favourite? Let me know and I promise to feature it on this blog