I was sent a link to this 2013 production 'Addiction: Afghanistan's Secret Shame'
by BBC Persian journalist Tahir Qadiry - filmed and directed by Darius Bazargan
It is an excellent 45 min documentary, which looks at the contemporary addiction problem in Afghanistan with over a million heroin addicts (2009 figures). Afghanistan is not just a producer and exporter of drugs, but a major consumer. It's one way to deal with all the trauma of over 3 decades of war and current 40% unemployment. 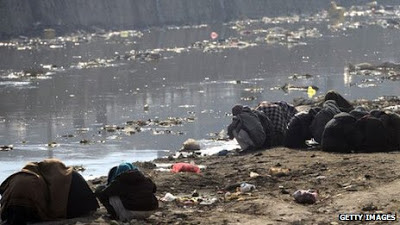 addicts by the Kabul River

You can watch an interview on Weekend World with Tahir about his programme  And see the full 45 minute documentary here Addiction: Afghanistan's secret shame. It's is well worth it......

The documentary focuses on addicts in Kabul and Mazar-e-Sherif (and Balkh).  And it features the NEJAT centre, which is the organisation I used to work for in Peshawar, as Drug Advisor, back in the 1990s. I am still on their advisory board. They come over well in the documentary and I felt proud to be associated with them.  But I also felt somewhat disillusioned in that in spite of all our efforts the drug problem has been relentlessly increasing.  Nejat may indeed be one of the most established treatment programmes in the country, yet they still couldn't help Jawed the young 18 year old addict from Badakhshan, who is the storyline focus of the documentary.  He is seen leaving, having gone back on drugs, wandering the street of Kabul alone, as the snow falls around him, with the 'Velvet Underground'  Heroin song as background music (lyrics by Micheal O'suilleabhain) :

NEJAT celebrated its 22nd anniversary on 26th June = UN Drug Day. Among the congratulatory messages was this one from a previous colleague:

Salam!
It is so good news that the tree that was planted for the treatment of marginalised and disadvantaged population of Afghan drug users will be over two decades old in next couple of days. It has been a big honor and we are proud that we have also taken part in it as much as we could. It is noteworthy that the credit of this model of treatment of drug addicts extended and prevailing across country, above all, goes to the founders of Nejat Center who have saved countless lives since the inception of this humanitarian program in 1992. May God bless you all.
Best wishes. Ahmad Shah