This is the 2nd blog about a series of Paintings by Stanley Spencer, 1891-1959, which are very appropriate for Lent. As I mentioned I  only just discovered them in a book at Offa House Diocesan Retreat Centre.

They are powerful images of Christ's humanity in his (Lenten) 40 days in the Wilderness.   The text is taken from a brochure produced by the Art Gallery of Western Australia which houses all the painting. Only 8 paintings were ever completed, although here were apparently 16 sketches, all owned by the AGWA.  But Stanley's intention was to create a grid of 40 paintings, one for each day in the wilderness.......

I particularly like these 4 images as they are all interactions with the natural world and show a fascination with, even adoration of creation. 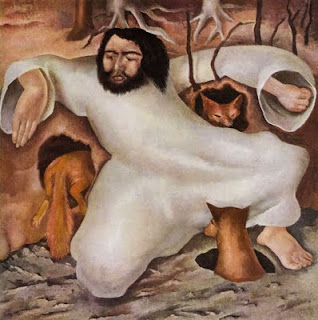 The foxes have holes 1939
‘ And Jesus saith unto him, the foxes have holes and the birds of the air have nests;
but the Son of man hath not where to lay his head.’ Matthew 8:20
The strong structure of the work is demonstrated by the composition in which the triangle formed by the foxes is interlocked with the triangle of the figure which opposes it. Christ is seen living in complete harmony with nature. 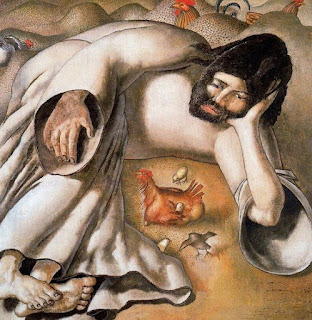 Christ in the wilderness: the hen

‘...how often would I have gathered my children together, even as a hen gathereth her chickens under her wings...’ .Matthew 23:37
a relaxed Christ encircles and gives shelter to the Hen as she succours and shelters her chicks. 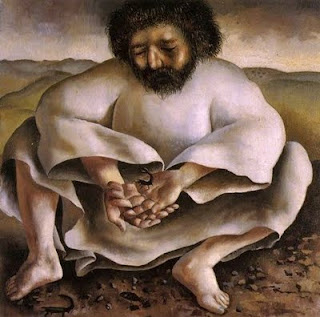 The scorpion 1939
‘Behold, I give unto you the power to tread on serpents and scorpions, and over all the power of the enemy:
and nothing shall by any means hurt you.’ Luke 10:19
The undulating surface of the figure relates to the hills seen behind, Christ is made one with the geology.
Spencer marvelled at the empathy between such dangerous creatures as the scorpion and the power of love. 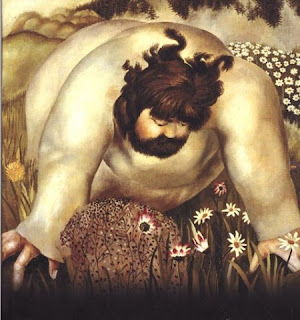 Consider the lilies 1939
‘And why take ye thought of raiment? Consider the lilies of the field, how they grow;
they toil not neither do they spin; And yet I say unto you ,
that even Solomon in all his glory was not arrayed like one of these.’ Matthew 6:28-29
The bulky form of Christ which fills the canvas, is centrally placed amongst wildflowers, which are found in Cookham, Spencer’s home town.

Stanley Spencer (1891-1959)
A significant and eccentric British artist whose altering circumstances and condition are reflected in his artworks. His strong sense of place during his early years in Cookham and the sense of disorientation during World War II are both demonstrated in his very personal vision of Christ in the wilderness series. These works, which were painted between 1939 and 1954, may appear deceptively simple but on closer observation, they reveal a classical order where shapes and colours achieve a harmony. Spencer’s communication of his religious beliefs often over- rode the accuracy of his highly personal depiction of Christ.