It has just been announced that Street Angels has been awarded the Prime Ministers 'Big Society' Award.  This being received by Paul Blakely MBE of Halifax Street angels who pioneered the approach,  which is now operating in 100 towns and cities across UK (including Woking)
Woking Street Angels also got an honourable mention in the House of Commons by Woking's conservative MP, Jonathan Lord, during a  debate on Hackney Carriages. 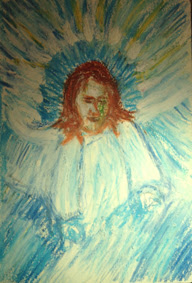 This blog's painting is loosely based on Van Gogh's Angel, in Oil Pastel......  another Angel keeping watch at night.....    I've not blogged about Street Angels for a while but have been out 3-4 times this year so far. So come reflections on the evenings......


Sat 31st December  New Years's Eve
a night of 2 halves (as often is the case)  of partying and fun up to around 1 or 2 am with incidents forming the sting in the tail after 2 and 3 am.

An African man was frolicking on the wall outside Woking Station under the Canopy, running along recklessly. I was concerned he might stumble and hurt himself so went to talk to him.  He got into a quarrel with a couple  and was pulled down from the wall onto his head (a very loud cracking sound!) by a passer-by who was not involved at all. It seemed to me to be a moment of blatant racism.
The Police cordoned off the area because it was a potential GBH.  I had to go and give a statement to what I had witnessed and left my fellow angels to stay with the injured man and wait for the ambulance.   I later learned it had not arrived for some reason and the police had taken him to the hospital in a van for a check up. I had no idea what happened to him, and feared the worse. 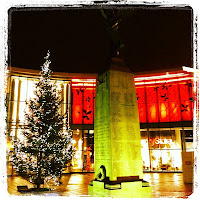 New Year's Night:  'All is calm. all is bright'


I like the new Outside lights jackets - they really do glow in the dark!  Outside lights set up a table under the Station Canopy and serve free teas and coffees. They are also available to chat and talk about issues of faith. They are a great complement to the walk-about service of the Street Angels.
As for the evening itself,  the highlight was being sung to by an elderly traveller who had an excellent voice and a real twinkle in his eye. 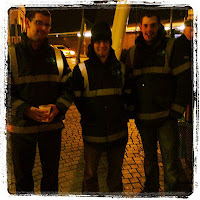 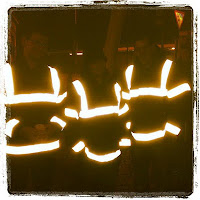 Outside Lights glow in the Dark

Friday 3rd February
Very Cold night - we think it was around  -6 degrees. It was so cold,  some youngsters even wore coats!  So we changed the pattern to one hour out and half hour in just to keep warm.  We  helped one very cold  girl, with a blanket and eventually managed to get her into a taxi, and she definitely did not want her boyfriend to follow.
We witnessed a fight outside Spec Savers - a bunch of blokes making a spectacle of themselves
As usual we gave out lollipops which seemed to cheer people up in the cold.  There was quite a lot of broken glass around which we ended up cleaning up.   Definitely decided hand-warmers would be a great idea and maybe even a hip flask !  Team 2's pedometer recorded 8.6 miles walked during the night shift - no wonder it was quite tiring.
The Quake had a Goth Night with about  800 youngsters, who dispersed like smoke at the witching hour.
One great relief for me was meeting Mohinda from Congo, the guy who had been pulled from the wall on New Yera's eve. He said he'd hurt his hand and not his head whihc he claimed was made of iron! However he did have a big scar on his forehead. He also tended to talk a lot about nothing, definatley not right in the head ..... 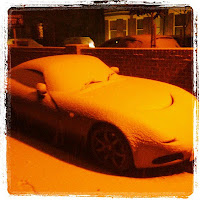 Minus 6 at night:  A cold and frosty morning


Friday 16th March
The majority of the evening centred around Agnes, a young woman from Poland, who was seen by one of the Angels sitting with her two pink suitcases.   She had been kicked out of her cousin's after  a dispute over money and could not return and was intent on getting the bus back to Poland on Sunday (it does a pick up in Woking!)  She did not have quite enough money for the bus (it costs £75) nor for anywhere to stay. She'd been hoping to sit in a waiting room at the Station til the morning and go to her agency and see if she could get some more cash.   Different Angels spent most of the night talking to her  under the canopy or in MacDonald's  and guarding her luggage. Also trying different hotels and B&B's. The Police were in a similar position of being concerned but not being able to act.  We were all using smart phones to surf the Internet for solutions.

Eventually someone put her up in Holiday Inn (not on our usual circuit) and we encouraged her to come to Christchurch the following day to talk more, after she's been to her employment agency.    An unfinished story -  which highlighted her vulnerability, and also the lack of facilities to sit and keep warm in Woking in the wee hours of the morning. 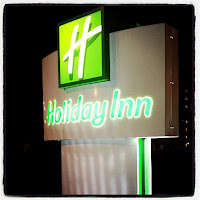 No room at the Inn

For me these evenings highlight the effectiveness of the ministy and the contribution Street Angels make to the Big Society. It also illustrates some of the gaps there are that need plugging....

Thank goodness the Angels were there to help.... xx