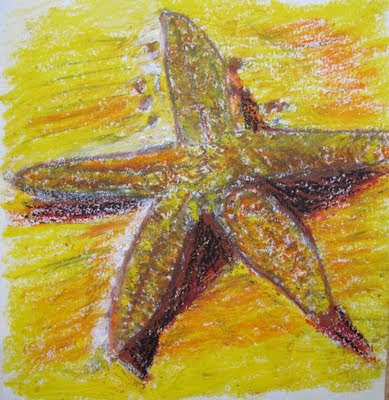 This time it's a painting of a starfish based on a picture in a brochure in a hotel. We were by the beach in Thailand at the time.
Starfish have become significant since I read the book and have engaged with the ideas. I now seem to see starfish everywhere. You can read some excerpts here
I did a blog previously on the Starfish and the Spider which includes a brief outline of some of the main points and some useful links.
I even came across a Starfish Asia web page owned by someone I know, dedicated to children's education in Pakistan.
As we consider the setting up on a separate CMS entity in Asia, the Network ideas contained in the book have grown in significance.
I was at a conference on Samaritan Strategy and 3 people mentioned the Starfish book as sinificant It seems that it has helped a lot of people to think out side of the box and re-imagine organisations. In a more networked less centralised way.
So back to the 5 simple strategies for building networks (based on the ideas in the book - slightly adapted)

1. Catalytic leadership - a style of leadership that enables people to participate , an instigator and enthuser who gets people on board and inspire action.
2. Core Ideology - for AsiaCMS this is the Missio Dei - the mission of God that binds people together. But what is core will grow and become clearer.
3. Champions - a variety of people - maybe volunteers, or staff or 'people in mission' who champion the cause and spread the message and get others involved .....
4. Cells of Participation or Communities of Practice - maybe in certain locations, Seoul, Delhi, Bangalore, Kathmandu, Manila, Islamabad, etc who share stories and pray and encourage each other to participate in the Missio Dei.
5. Connecting using pre-existing Networks. Rather than re-inventing the wheel it is using what is already there. Networks like DNA/Samaritan Strategy, ISAAC, Micah Challenge to name but a few.

This book inspired me as we started the enquiry process - looking at what AsiaCMS might become. It continues to provide a helpful alternative, light, networked structure as we look at implementation. And I suppose its all about simple actions repeated again and again . A bit like the original Starfish story

A well known author and poet was working and vacationing on the southern coast of Spain. One early morning, he was walking along the beach - the sun was rising, the rain had ended, the rainbows were magnificent, the sea was calm. While enjoying the beauty around him, he glanced down the beach and saw a lone figure dancing about. Fascinated by this person celebrating the new day, he moved closer. As he drew nearer, he realized that the person was not dancing, but in one graceful motion was picking up objects from the beach and tossing them into the sea. He approached the young man and saw the objects were starfish. "Why in the world are you throwing starfish into the water?" "If the starfish stay on the beach, when the tide goes out and the sun rises higher, they will die," replied the young man as he continued tossing them out to sea. "That's ridiculous! There are thousands of miles of beach and millions of starfish. You can't really believe that what you are doing can possibly make a difference!" The young man picked up another starfish, and tossing it into the waves, said, "It makes a difference to this one."