Love Wins: 'between heaven and hell' 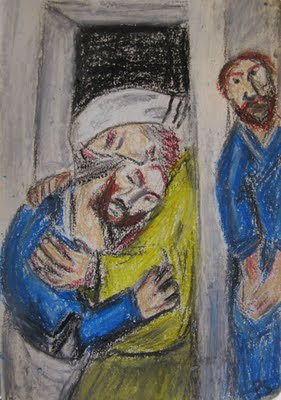 I told you I like the story...... This is another version of the same story of the prodigal's return. Based on a painting by Sieger Keoder, the catholic priest-artist.
The father embraces his wayward son and the older brother looks on from around the corner. Almost like he is a spying from a distance.
The father and younger son are lost in the moment of their reconciliation. The older brother is immobilised in his jealousy.
One is in heaven; the other is in hell ......
Rob Bell elaborates on this in his book: 'Love Wins'. The English version has a different subtitle: 'at the heart of life's big questions'. The US edition is subtitled ' Heaven, Hell and the Fate of Every Person Who Ever Lived' - a video outlines the questions behind the book and the questions behind the questions.
The idea he pursues is that it is possible to be in heaven or hell whilst occupying the same space and time.
I'll just pick out some quotes to give you a flavour, but to get the whole you will need to read it yourself.......
Now most images and understandings people have of heaven and hell are conceived in terms of separation. Heaven is 'up' there, hell is 'down' there. Two different places far apart from each other. One over there and other over there.
This makes what Jesus does in his story about the man with two sons particularly compelling. Jesus puts the older brother right there at the party, but refusing to trust the father's version of the story. Refusing to join in the celebration.
Hell is being at the party. That's what makes it so hellish. Its not an image of separation, but one of integration. In this story, heaven and hell are within each other, intertwined. interwoven, bumping up against each other' (169-170)
Hell is our refusal to trust God's retelling of the story (170)
The older brother's failure to trust, we learn is rooted in his distorted view of God. There is a problem with his 'God' (173)
The younger brother believes he is cut off, estranged, and no longer deserves to be his father's son, because of all the terrible things he's done. His badness is his problem, he thinks (185)
Now the older brother believes that the reason he deserves to be a son is because of all the good he's done, all the rules he's obeyed, all of the days he's 'slaved' for his father. His goodness is to his credit, he thinks. (186)
Neither son understands that the father's love .... cannot be earned and it cannot be taken away. It just is. It's a party, a celebration, an occasion without beginning and without end. It goes on, well into the night, and into the next day, and the next, and the next. Without any finish in sight. (187)
The older brother is in hell
The younger in heaven
You can see it in the picture. ....
Both are invited to the party.....
The father has taken care of everything. It's all there, ready, waiting.
It's always been there, ready, waiting.. (188)
Posted by MullanaNasruddin at 23:48

This idea of heaven and hell occupying the same space at the same time is behind C.S.Lewis's portayal of the guys in the stable in the Last Battle. I think it has to be right. Hell is contained within the heart of God like a virus vault in a computer. Where else can it be? So when Jesus drew all things to himself on the cross, this is where any ultimately indestructible evil remained.
This makes me glad not to be God, but then catches me up short. For we are in his image, and this willingness to suck up evil and contain it safely away from damage seems to be something that a heart renewed, recreated in him, has to discover how to do in unconditional love. This makes sense of how we really can 'love our enemies.'

I think Lewis's Narnia has had a deeply, profound effect on me and influenced my theology and thinking.
So many helpful images .....
The Colormine Officer, Emeth (Heb 'Truth') whose service to Tash is 'credited to him as righteousness'; the Great Door and the creatures of Narnia looking into the eyes of Aslan and registering fear or love - a self judgement
Lots of clues to Lewis's more inclusive views on Salvation .......

I found your idea of the virus vault fascinating.