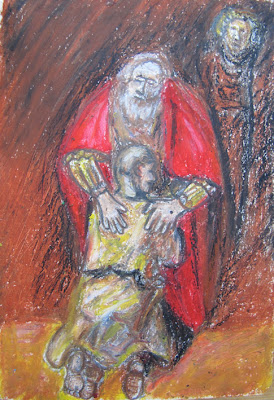 I've been reading Rob Bell's 'Love Wins' - a very easy read. My son had been reading it and his enthusiasm was contagious. Described as 'a Book About Heaven, Hell, and the Fate of Every Person Who Ever Lived'. Have a look at the introductory video on Rob Bell's website to get some of the questions behind the book.
It advocates a more inclusive position on the whole question of Salvation, and particularly looks at sticky issues of heaven and hell, propagating what has been called a 'wider hope'. It has caused quite a stir in evangelical circles, especially across the Atlantic. The Evangelical Alliance have a response by Derek Tidball, which is starting a conversation.......
At the heart of the book is the story of the Prodigal son. One of my favourite stories. More of that later ....
I have been compelled by this story - we used it when I was in Karachi working with drug addicts. Everyone seemed to find their place in the narrative. We were heavily influenced by Kenneth Bailey's 'The Cross and the Prodigal' looking at the story afresh 'through Middle Eastern Eyes' which seemed to help in a Pakistani context.
Henry Nouwen also took me deeper in the Return of the Prodigal Son, meditations based on Rembrandt's painting, which I also visited at the Hermitage in St Petersburg ( I wrote a blog post on it in April 2001)
So I had to have a go at painting my own 'impressionist' version of part of the Rembrandt, concentrating on the detail of Father's embrace of the returned younger son with older brother looking on, rather judgementally, from the shadows.
Back to Rob Bell's book. He has a chapter: 'The good news is better than that' (Ch 7) in which he describes three stories within the one story.....
The younger son who as he heads home in shame after squandering all his money, is convinced he's 'no longer worthy' to be called his father's son. That's the story he's telling, that's the one he's believing. Its stunning then when he gets home and his father demands that the best robe be put on him and a ring placed on his finger and sandals on his feet. Robes and rings and sandals are signs of being a son. Although he's decided he can't be a son anymore. his father tells a different story. One about return and reconciliation and redemption. One about being a son again. (165)
There are two versions of the same story The son's and the father's. And the younger son has to choose which one to believe, which one to trust and to live in. His own version of events or his father's.
Same it turns out for the older brother. He too has his own version of his story. He tells his father 'All these years I've been slaving for you and never disobeyed your orders. Yet you never gave me even a young goat so I could celebrate with my friends. But when this son of yours (he cant even say his brother's name) who has squandered your property with prostitutes comes come you kill the fattened calf for him!' So much in so few words. One sense he has been saving it for years and now out it comes, with venom. (166)
The father isn't rattled or provoked. He simply responds 'My son, you are always with me, and everything I have is yours..... But we have to celebrate and be glad because this brother of yours was dead and is alive again; he was lost and is found' (167/165)
Its the same issue of which story to believe. His own story of slavery and his father's meanness and cheapness and how unfair it all is. Or his father's redefinition of the narrative. The father tells a different story. about sonship not slavery, about the abundance of resources not their scarcity, and a redefinition of 'fairness' which is replaced by grace and generosity. People get what they don't deserve. Parties are thrown for younger brothers who squander their inheritance' (168)
The difference between the two stories is , after all, the difference between heaven.....and hell (169)
to be continued.....
Posted by MullanaNasruddin at 12:26