Ethical Evangelism - the 10 commandments of Mission! 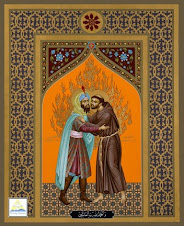 St Francis and the Sultan

The first ever set of guidelines giving advice for Christians and Muslims, who want to share their faith in an ethical way, will be launched on WED 24th June at Islamic Relief’s Headquarters in London.

The guide, which contains 10 points of advice, has been produced by the Christian Muslim Forum, a national body set up in 2006 to improve relationships between the 2 faiths.

Youth Specialist on the Forum, Dr Andrew Smith, will be one of the key speakers at the launch. He has been working for the evangelical organisation Scripture Union in inner city Birmingham for the past 14 years and has been active in promoting his own faith whilst at the same time seeking to listen to and understand his Muslim neighbours.

“Speaking with local Muslims and sharing my faith has been fascinating, stimulating,  even fun,  but at times it has become competitive, aggressive and has left a nasty taste in my mouth. I was lef feeling frustrated and defensive and with no wish to do it again!  Talking to others I realised that this was a common experience, so the idea of a set of principles that would help both faiths avoid this, seemed  to me an obvious way forward”

Speaking alongside Dr Smith will be Shaykh Ibrahim Mogra, Interfaith spokesman for the Muslim Council of Britain. He recognises that this is a controversial and sensitive area

“Islam and Christianity are two world religions that are missionary- and therefore are ever vying with each other for converts.  But we should be able to speak of our faith honestly and with conviction, without  demeaning or ridiculing others. There is no place for coercion or manipulation and when a person does convert from either faith that decision should be respected. It is our hope that these ethical guidelines will be adopted by many Christian and Muslim organisations.”

The launch will be chaired by the Vice-Chair of the Christian Muslim Forum, Dr Richard Cheetham, the Bishop of Kingston, and will be attended by many representatives from Muslim and Christian missionary organisations.