I received the following from Ruth, based in Bethlehem, about her day in Gaza. 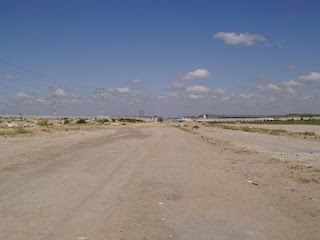 Gaza? What do you want to go there for? Dangerous, unsafe, and war zone are a few of the words that come to mind and for most of us  reasons not to visit. For the people of Gaza the damage caused by the war and the continued restrictions are utmost in their minds and lives. I realized that I needed to go and see for myself. Although much of media focus is now not on Gaza, it is still an area of the world that needs our attention. An area half the size of Wales, with 1.5 million people and only 3000 Christians. All are suffering and by visiting at least we could encourage and pray with them.

After months of waiting and much frustration, the Bible Society sponsored me to get a permit to enter Gaza. We left Bethlehem early in the morning to be at the crossing point by 8:00 when it opened. I went on behalf of the Anglican Church in Jerusalem and one of our aims was to take in medical equipment for an audiology clinic and blankets for a hospital in Gaza city. After much discussion with the authorities they decided that we could not take the medical equipment in and only let us take the blankets and some vitamins for children. We had to leave our frustration behind with the equipment and concentrate on getting through and seeing people. From the Check point it is 1 mile to the Gaza border. Another Check point and I found it rather amazing having my rucksack checked by a Hamas official with a uniform and a gun in his holster. Two hours from the Israeli border we were in Gaza city. 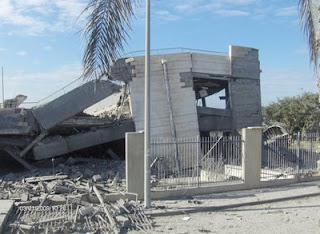 The first stop was a Christian School, called “Menara” or Lighthouse. Although the children had finished for the summer we were able to see the excellent, well maintained  facilities which had a very good reputation. We were entertained for lunch, falafel and shawarma, but while we were eating power went off twice, a normal occurrence. To commemorate the end of the latest war, the school, with funding from the West was able to build an asphalt playground. On the wall had been painted the slogan “Free Gaza”, which for me was very poignant.

Next we moved on to the Al Alhi hospital, just round the corner. The hospital was started by CMS in the 1870’s and continues to this day to be supported by them. Around the area of the hospital are grave yards and buried there was a CMS missionary nurse who was shot whilst transporting some children in 1972. It was also alarming to see some families living in the grave yard making makeshift homes out of corrugated iron. I learnt later that these families send their children to the Menara School.

Suheila, the hospital Director, was very pleased to see us and gave me a big hug when she knew that I was with CMS. I hope and pray that this is a contact that will be developed and used in a very positive way now that I have permission to visit. CMS had and still does play a very important role in supporting the hospital.

It was time to head for the Checkpoint to make it back by 3.0pm. The taxi took us the long way back through an area that has suffered major damage during the recent incursion. I really could not believe what I was seeing. There was devastation and many buildings had been completely flattened. We saw families trying to live among the concrete ruins because they have no where else to go. This was their land and their home so where else could they go? It appeared that the rockets were very specifically aimed and so the damage in places was very selective. Other areas were completely destroyed.  All this on the way back to the Checkpoint where on the other side was a completely different world. 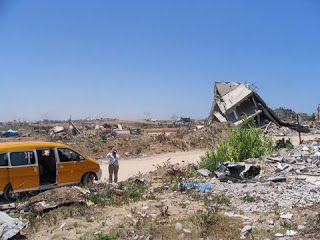 Another 2 hours at the Check point and then back to our van and onward home to another town surrounded by a wall, Bethlehem.