I love this story of Mulla Nasruddin. I found this one on a site I hadn't seen before called alhaddad
which doesn't seem active at present. Great stories though and wonderful pictures. 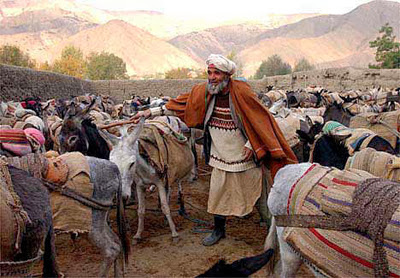 Every first of the month Mullah Nasruddin used to cross the border with thirty donkeys, with two bails of straw on each.

Each time the custom person stopped him to ask about his profession and Nasruddin would reply, “I am an honest smuggler.”

So each time, Nasruddin, his donkeys and the bails of straw were searched from top to toe. Each time the custom folk could not find anything.

Next week, Nasruddin would return without his donkeys or bails of straw.

Years went by and Nasruddin prospered in his smuggling profession to the extent that he retired.

Many years later, the custom person too had retired. As it happened one day, the two former adversaries met in a country far from home.

The two hugged each other like old buddies and started talking.

After a while, the custom person asked the question which had been bugging him over the years, “Mullah, please let me know what were you smuggling all those years ago?”

Nasruddin thought for a few seconds and finally revealed his open secret, “Donkeys.”